TheNextWeb is reporting that at Facebook's F8 developer conference, Microsoft and Facebook announced the beta release of Docs.com. The site is built on, what seems to be, a stripped down version of Microsoft's upcoming Office 2010 Web Apps platform, and can be used to create and share Office documents with Facebook friends. The service can be used for Word, Excel, and PowerPoint documents.

Docs.com is part of Microsof'ts FUSE Labs, which is centered around creating rich, online, social experiences. The site seems to be fairly functional, though it's still in beta and should not be relied upon as your primary office suite. It's interesting to note, that according to the FAQ, only one person can edit a document at a time. This means that although it's a social experience, it's not an actual collaboration tool. Google Docs still has the upper hand in this category, as will Office Web Apps when it's released.

It's unclear what kind of integration, if any, this site will have with Office Web Apps when it's released. After looking around the site, there doesn't seem to be any mention of SkyDrive storage or anything like that. For all we know, the service may store all of your documents on Facebook and its servers, making it a completely separate entity from Microsoft's upcoming offering. 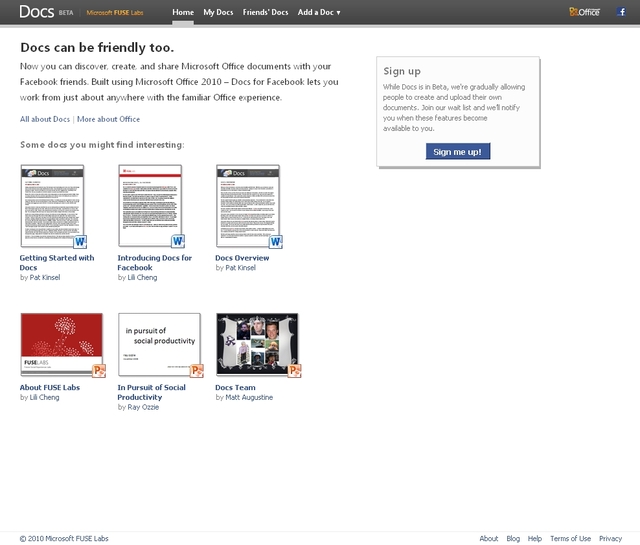