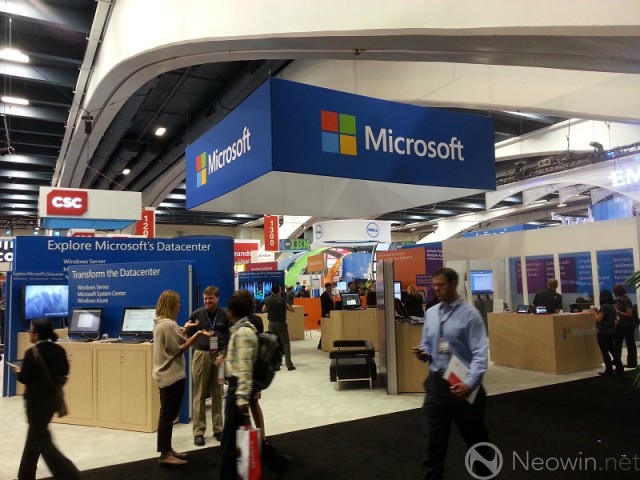 The Oracle OpenWorld conference has been abuzz with a lot of new announcements. At the opening keynote, Oracle's CEO, Larry Ellison, made a splash with the announcement of the In-Memory Option for databases, an appliance customer built to backup databases, and a new server that can process data at an ungodly speed.

Microsoft made their own splash this morning with the announcement of a partnership that will allow customers to use Oracle products within the Azure cloud. The offering is currently in the preview phase, meaning customers can try out these technologies and pay only the price of compute. This program will allow customers to run Oracle databases, WebLogic middleware servers, Java development, and more all within the flexible Azure cloud.

We spent some time chatting with Steven Martin, Microsoft's General Manager of Window Azure, who shed some light on this program.

How does the licensing work with this program?

Steven: Customers have the ability to either bring their own Oracle licenses with them into Azure, or they can rent licenses from Azure.

How much will the Oracle licenses cost to rent?

Steven: Pricing has not yet been finalized.

What kind of traction are you getting with Azure in general?

Steven: The market has been loving Azure. We're seeing 1,000 customers signing up each day, and that's been sustained for several months. We're excited to see how much interest we'll get from the Oracle partnership and should have numbers available in a couple of days. The IaaS (Infrastructure as a Service) platform has been doubling every 3-6 months.

How are the datacenters handling this sustained growth?

Steven: We're currently building two new datacenters in Japan, two in China, and have announced two more in Australia. All in all, Microsoft is building 25 new datacenters in the next 6-12 months, although some of those are expansions of current locations. Most of the buildings are using the new open air concept in order to reduce energy costs. We'll also be announcing new locations this fall.

How does Azure stack up against competitors like Amazon's Web Services?

Steven: Both companies are competing on the commodity side of storage, compute, and bandwidth. We have a commitment to never be undersold, so if Amazon reduces their prices, Microsoft follows suit. We're deeply committed to winning the price/performance battle and want to ensure that an hour of compute on Azure provides more value to the customer than an hour of compute on AWS. One advantage is that data stored in Azure is also backed up to a location at least 400 miles away so that a "smoking crater" event will not mean a complete loss of your data. We also don't use any commodity network equipment, giving us better reliability than AWS.

The other big advantage we offer is that we give the customer a freedom of choice. Since Azure uses Hyper-V, we give customers an easy way to migrate things from their own Hyper-V environment into Azure and then back into their own private cloud if they choose. With us, you don't have to worry about the "Roach Motel" approach, where virtual machines check in, but never check out.

Thank you for your time today.

Steven: Thank you. We'll have another big announcement here in a couple of days that we're looking forward to sharing with your readers.

In addition to this this news, Microsoft will also be holding their first ever keynote at Oracle OpenWorld. If you want to learn more about this announcement, it will be streaming live today at 4:30pm ET. In addition, I'll be tweeting my thoughts during the keynote, so follow me on Twitter if you want to hear real-time details.