Microsoft is planning a Windows Store for Windows 8 according to documents leaked to the Internet on Monday.

Consumers will be able to search on the web or locally on a Windows 8 machine to access applications from the store. Microsoft also details plans for application developers to help reach millions of users. One of the goals is to ensure licensing and monetization for developers is flexible with a transparent on-boarding process.

It's clear that the 'Windows Store' will be a software service Microsoft provides and hosts fully in the cloud. The company will likely build the distribution model on Windows Azure to lure application developers.

Microsoft tried its hand at electronic software delivery with the Windows Marketplace. The software giant scaled back the platform in November 2008 when it announced that the digital locker would be shutdown in 2009. The digital locker and Windows Marketplace could be used to purchase and download third party software titles compatible with Microsoft Windows, and then use that purchased software on any computer the software license allows. Those wishing to purchase copies of Microsoft software are now directed to the Microsoft Store. Clearly Microsoft is ready to test the platform again with Windows 8. 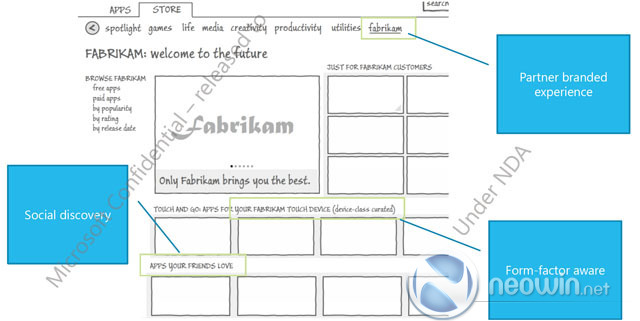