The software giant has posted several job vacancies for two new stores in Minneapolis and Chicago. The company is looking to hire a Retail Community and Events Specialist, Product Advisors and Trainers in preparation for the new stores. It's not clear from the job postings when the stores are due to open.

The new stores will join the fourth Microsoft store, recently launched in San Diego. Microsoft also has the first two stores located in Scottsdale, Arizona and Mission Viejo, California, and a third store in Park Meadows Mall - Lone Tree, Colorado. Microsoft is also planning to open a fifth store in the Seattle area, although an opening date has not yet been set.

Apple opened a store recently in Uptown, Minneapolis on Saturday June 19. It's not yet known if Microsoft is planning to locate their Minneapolis store in Uptown. Microsoft's fourth store in San Diego, California opened on the same day Apple launched its iPhone 4 device in June. The San Diego store is located in the same Fashion Valley Mall, four shops away from Apple's own store. Both stores ended up in a surreal showdown with extremely long queues for both stores on the Microsoft store's launch day.

Apple also has a retail store in Chicago, which opened in June, 2003. Again, it's not clear from the job postings whether the store will be located on North Michigan Avenue, alongside Apple's retail store. Neowin has reached out to Microsoft officials to confirm the stores' exact locations but at the time of writing we have not received a response.

Microsoft introduced the Kinect gaming system to its existing four stores recently. Customers can be the first to play the new controller-less system, due to launch in November for Xbox 360. The Microsoft Stores offer all of the Microsoft products found through online retailers and inside major retail chains, including keyboards and mice, Windows 7, Xbox 360 and many more products. Apple currently has 222 stores in the United States alone, and 287 total stores worldwide, including 27 in the UK and 14 in Canada. 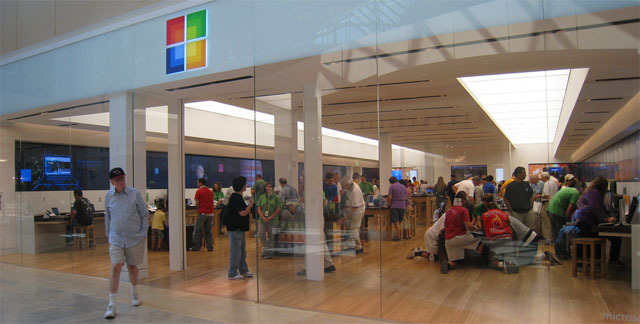