China is infamous for their Internet censorship and the “great firewall of China,” but a leaked speech to the Standing Committee of the national People’s Congress on April 29 contains rhetoric that implies a Chinese Internet that not only defensively protects its citizens from outside influence, but also actively spreads government propaganda to the four corners of the Earth. This planned effort to change public opinion using the Internet was outlined in an accidentally uncensored speech by Wang Chen, deputy director of the Propaganda Department. The speech was promptly removed from the official government website once it was posted. According the Sydney Morning Herald, an advocacy group Human Rights in China picked up the speech before it was taken down for sanitation and relocation. 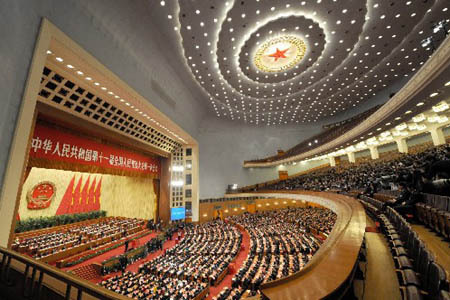 Wang was optimistic about China’s use of the Internet to promote its ideals. Here are some excerpts from the speech:

“The Internet has broadened the front of our propaganda and ideological work. In recent years, we have used the Internet to vigorously organize and launch positive propaganda, and actively strengthen our abilities to guide public opinion. [As a result,] we have been able to play an important role in serving the overall interests of the Party and our country, and have achieved major innovations in the Party’s propaganda and ideological work in the new era.”

“Government agencies at all levels and in all regions have gradually built mechanisms to guide public opinion through integrating the functions of propaganda departments and actual work departments, integrating online media and traditional media, and integrating major news websites and commercial websites. These mechanisms have continuously improved the capabilities and levels of public opinion guidance. Under the unified leadership of the Party, we organized initiatives to guide public opinion related to major emergency incidents, hot topics related to people’s welfare, and key ideological issues.”

Wang goes on to outline major government institutions and departments and their respective responsibilities in the proper management of the Chinese Internet. According Anne-Marie Brady, a Chinese propaganda expert at the University of New Zealand, this behavior is simply endemic of Chinese isolationism regarding global connectivity. “'China has this goal of establishing a Chinese intranet, removing China from the global Internet, and you can see that in this report.'' This wouldn't be the first time China is described as isolationist. Google, through a stroke of diplomatic magic, managed to get China to renew their license to operate their website on Chinese networks last week. The site faced nearly unstoppable pushback from the Chinese Government when they let the Chinese people use Google to for unfiltered search.