According to a press release, Microsoft has released its fourth quarter results ending June 30, 2009. Microsoft announced a revenue of $13.10 billion. That's down 17% from last year. Net profit for the period was $3.1bn (Â£1.9bn), down by 29% from the same period a year earlier.

"Our business continued to be negatively impacted by weakness in the global PC and server markets," said Chris Liddell, chief financial officer at Microsoft. "In light of that environment, it was an excellent achievement to deliver over $750 million of operational savings compared to the prior year quarter."

In a conference call, Chris Liddell said, "We don't expect conditions to improve much, but we don't expect them to worsen either".

Client revenue was the main headline according to ZDNet. Here's an explanation from Microsoft:

Client revenue decreased primarily as a result of PC market weakness, especially PCs sold to businesses, and a 13 percentage point decline in the OEM premium mix to 59%. Revenue growth from Windows operating systems was also impacted by a $276 million deferral for the Windows 7 Upgrade Option program. OEM revenue decreased $1.1 billion or 31%, while OEM license units decreased 10%. Based on our estimates, total worldwide PC shipments from all sources declined approximately 5% to 7%, driven by decreased demand in emerging and developed markets. 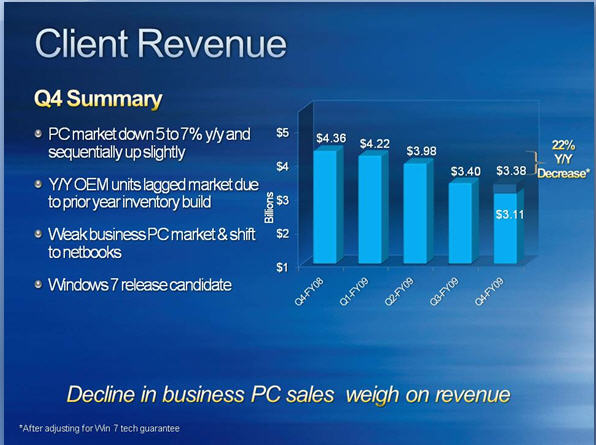 This comes as no surprise since research from Gartner predicted that worldwide PC sales would drop 6% from last year's levels despite Windows 7, which was just recently finalized, and has shown strong pre-order sales.

In terms of it's business outlook, Microsoft is providing operating expense guidance of $26.6 billion to $26.9 billion, for the full year ending June 30, 2010.