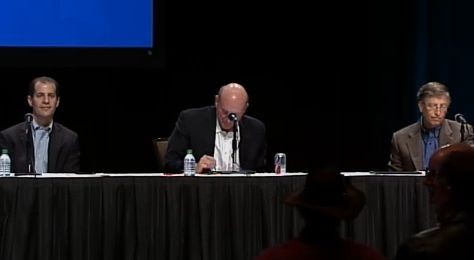 The annual Microsoft stockholders meeting in Redmond, Washington was held earlier today and, as expected, there were only a few new nuggets of news that came out of the meeting. CEO Steve Ballmer told the assembled crowd that the company was now selling four times the number of Windows Phone products than it had in 2011 and that several apps for Windows 8 had already generated one million downloads.

The final portion of the meeting was devoted to the question and answer session, and Ballmer, Peter Kline, general counsel Brad Smith, and, yes, chairman and co-founder Bill Gates sat on stage, with a Surface tablet in front of each of them, to listen to the people who got lucky enough to ask questions to the executives before Microsoft ended the session less than an hour later. While Gates sat and listened to the stockholders' questions, he did not speak during the Q&A. 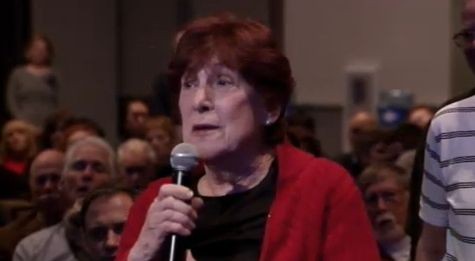 The first question came from stockholder Evie Schwan, shown above, who had a very simple thing to ask:

The stock went up, it split, it went to a hundred, and I thought wow, this will be my retirement, like a lot of people here. And it dropped to 30, and it has been there for ten years. So my question really is, why should I keep it? And please, no sales is hype. Just facts.

Ballmer told Schwan that he felt that Microsoft's revenue and profits had grown consistently over the years. He added:

Other questions posed by stockholders during the Q&A session concerned Microsoft's current anti-trust issues in Europe with Internet Explorer and the company's policies of trying to find and hire qualified people in the US versus bringing in workers from overseas.