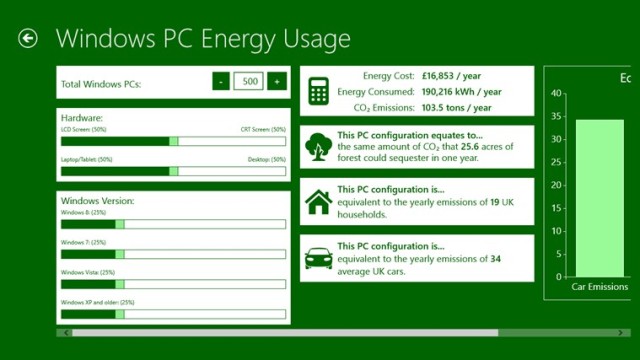 In this day and age, it's a good idea to use as little energy as you can for two main reasons: it can save you money and it's better for the overall environment in the long run. A business that has a lot of Windows PCs installed can use up a lot of energy in a short amount of time.

Microsoft has put the spotlight on a new third-party Windows 8 app that may offer a better way to conserve energy for business users with lots of PCs. A new post on the The Microsoft Green Blog links to the Microsoft Windows Energy Calculator, a free Windows 8 app developed by Green IT Software.

The app lets users type in the numbers of servers they currently use and how many they expect to consolidate via server visualization. The app then calculates how much energy and money are saved, along with carbon dioxide reductions.

And what about regular PCs in the office? The app calculator lets users type in the number of Windows PCs in the office, along with which version of Windows they are running, whether or not they are desktops or laptops and whether the monitors are CRT or LCD screens. Again, the amount of energy and money saved is shown in the app, along with carbon reductions. The app was made in the U.K., but the settings allow it to work with other currencies.