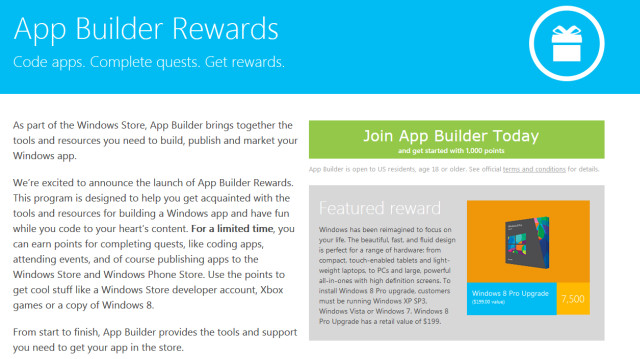 Earlier this week, Microsoft launched its web-based Windows Phone App Studio, designed to let anyone make simple apps for its mobile OS via a template UI. Now there's word that Microsoft is launching yet another program in the US that's been put into place to encourage others to make both Windows Phone 8 and Windows 8 apps.

The program is called App Builder Rewards and, as you might guess from the title, it offers developers a way to earn prizes by making and publishing apps for both platforms. The rewards program is open only to residents in the US that are 18 years of age and older. The website states that this program will last for a limited time, but the official rules for App Builder Rewards offer no word on a specific end date.

Joining the program itself is worth 1,000 points automatically and developers earn more by completing "quests" in their app building process such as completing their personal profile, submitting Pub details and more. Developers can also earn points by attending special events, either in the real world or online.

The type of prizes offered by Microsoft when certain point values are reached vary from free Xbox 360 games to one year for a Windows Store developer account, all the way to a free copy of Windows 8 Pro itself, which is worth 7,500 points (it costs $199.99 in the real world). The rewards program was apparently started in late July but Microsoft has made little effort to publicize its launch. However, it's clear that this is yet another way for the company to get more developers to make apps for both of its operating systems. It will be interesting to see if it succeeds.