Microsoft has been expanding its Bing Translator software to more and more of the company's products, including apps for Windows 8 and Windows Phone 8. Today, Microsoft announced that a new Translator app for Word and PowerPoint 2013 users will be launched in the Office store later in the day. 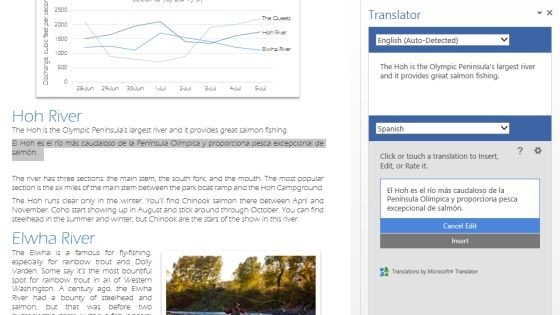 In a post on the Next at Microsoft blog, it states:

Expanding on top of built-in functionality within the products, it allows you to select any text and instantly translate it. Using this app, organizations can utilize within Office the custom translation systems they built with the Microsoft Translator Hub. Already, Office users translate over 1.3 million characters each hour using the built-in translation features.

The new app is being released as part of Microsoft's celebration of International Translation Day. The blog goes over how Bing Translator is now being used daily by people in 187 countries. In addition, over 80,000 developers are currently using Microsoft’s Translation API. The blog even looks to the future as Microsoft continues to develop improvements with the goal of making a Star Trek-like universal translator, something that the company has demonstrated a year ago with an impressive presentation in China.

Update: The app is now available to download but it is apparently for Word only, despite Microsoft's earlier announcement that it was also for PowerPoint.