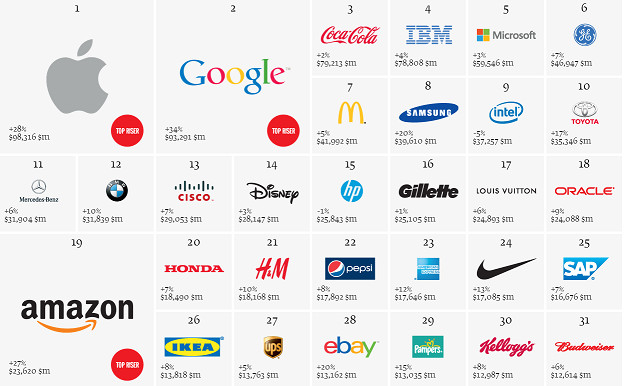 Interbrand has released its 2013 report for the "Top 100 Best Global Brands" on their website which includes brands from all types of industries, though this year technology is king.

The top 10 brands this year have been dominated by computer technology companies, replacing fast food and car companies. Apple toppled Coca-Cola as the most valuable brand and is considered worth $98.3 billion by Interbrand. Google has also shown a heavy rise in position from earlier and sits at number two with a total worth of $93 billion. Microsoft has been a slow riser and is placed at number five, just behind IBM. Samsung increased its brand value 20 percent and moved into the top 10 for the first time, placing eighth; Intel followed in ninth.

Other top risers include Amazon and Facebook. Facebook, which first entered the top 100 in 2012, has shown a growth of 43 percent to reach the 52nd position from 69th. Among the biggest losers, Nokia, Sony and Dell from the tech world have shown slump in brand value from previous year. Nokia, which is now worth $7.4 billion, has lost 65 percent brand value and dropped from 19th position to 57th. Sony is at 46th while Dell is 61st.

Apple, Google and Microsoft recently topped off a brand survey in Japan and also the one carried out by BrandZ. Coca-Cola has lost the top spot for the very first time since 2000. This survey marks the general global trend of tech products becoming part of pop culture and changes in people's perception with respect to these products.