In a post in the Feedback Hub, Microsoft announced an update to Sticky Notes today, which is currently available for Windows Insiders in the Fast ring. If you're not familiar with the app, it's pretty much like virtual Post-its, but ever since the Anniversary Update, there's a new UWP version of the app.

And that new app has a number of new features. If you write in a date, it will turn into a hyperlink that, when clicked, will open Cortana to set a reminder. You can find it in the Ink Workspace. 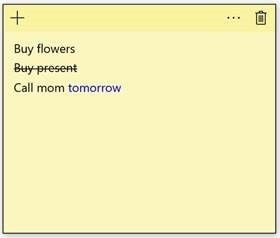 Microsoft also listed a number of fixes that are included in the update:

Some of these fixes are very significant. Many bilingual users are dissatisfied with how their device handles multiple languages, so any improvements will surely be welcome.

To update or install Sticky Notes, head over to the Windows Store right here.