Times have changed in the technology industry, and Microsoft perhaps understands this better than any other organisation in the world. Once, Windows PCs were the de facto standard across both the consumer and business spaces, but the massive shift towards a more mobile future, and Microsoft's failure to react quickly enough to that change, has rocked the company in recent years. Massive declines in PC sales have forced Microsoft to fundamentally re-evaluate its perspective.

At its Worldwide Partner Conference today, Microsoft chief operating officer Kevin Turner showed that the company appreciates exactly how great the challenges that it now faces really are, and nothing illustrates this more clearly than the slide below: 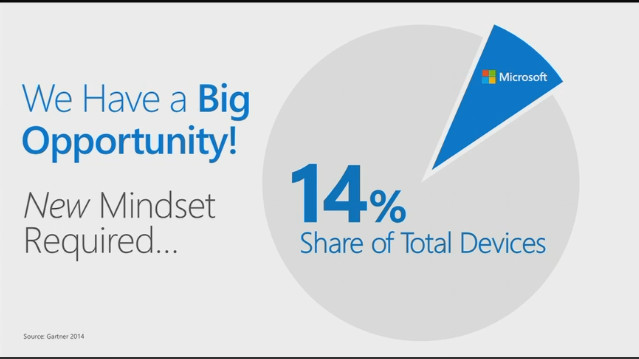 While Microsoft still enjoys over 90% share of the PC market, its total share of all devices - including not just PCs, but also smartphones and tablets - is now just 14%. With over a billion Android devices now in the hands of users, this is not at all surprising. Microsoft's global share of the smartphone market alone is just 4%, while Google is intent on pushing Android beyond smartphones and tablets and on to more laptops, PCs, wearable devices, TVs, cars and any other devices that can possibly handle it.

But Microsoft isn't giving up. "There is a new reality in this 'total' world of devices," Turner told the audience of Microsoft partners, "and this 14% presents a great opportunity for us to embrace that. And in this new world of 14% share, we have to have a new mindset. Because when you're in a 90+ percent share world, you have a 'protect and preserve' mindset. When you have a 14% share, you have to have a 'challenger' mindset." 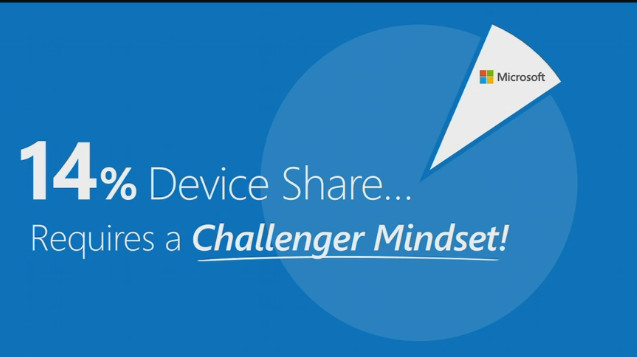 He added that this new challenger mindset will be driven by the need for market disruption, and that this needs to come not just from Microsoft but also from its partners. Differentiation is a further important factor, making sure that its products are unique and special enough to stand out from the crowd. 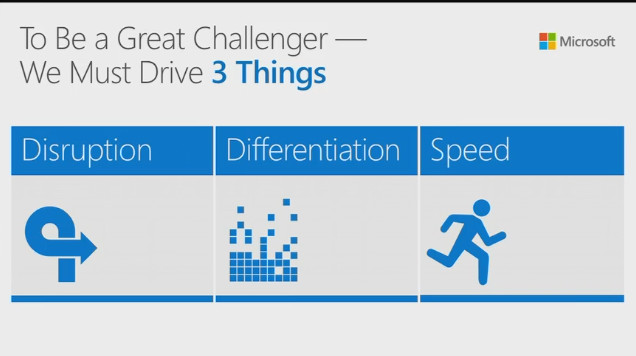 Finally, he said, speed will be an essential part of growing beyond that 14%. "We have to get there fast," he added, "and if we fail, we have to fail fast and learn fast. But do it, try it, fix it."

This is a very different Microsoft from the days of old - one not afraid to admit its weaknesses while still playing to its strengths. For now, the company is making all the right noises - but only time will tell if it can move fast enough to grow from "from 14 percent, to 16, 18, 20, 25", and beyond, as Turner hopes the company eventually will.