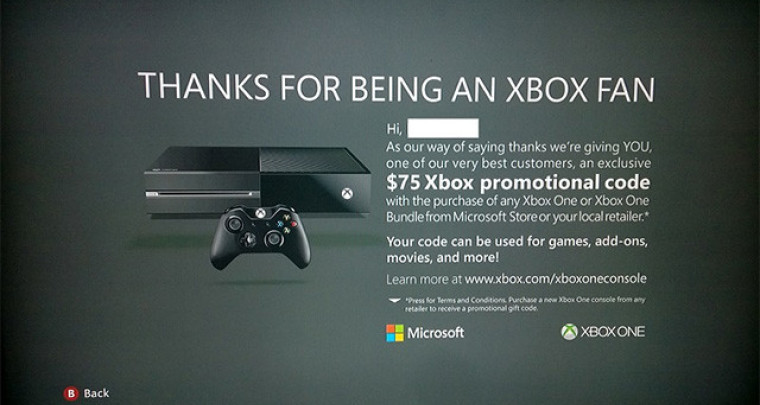 Own an Xbox 360 and don't yet have an Xbox One? You may want to purchase one before the end of the month, as Microsoft will give you a $75 digital credit to use on games and other digital downloads.

As spotted by NeoGAF user BeforeU, Xbox 360 owners are now being presented with an ad that promotes the deal, which lasts until 11:59 p.m. PST July 31. It's not clear yet if the deal applies to all Xbox 360 owners, as the ad displayed to Before U states it's being sent to "one of our very best customers." According to the ad, the promotion applies to "any Xbox One or Xbox One bundle from [the] Microsoft Store or your local retailer."

The disclaimer for the ad states it began yesterday, July 7, and that Xbox 360 owners in the U.S. are eligible. The deal appears to be associated with a user's Microsoft account and Xbox Live gamertag, as the $75 gift code "will be sent from Xbox to your Xbox One console message center" by Aug. 15. The code is only redeemable until Oct. 15, and after it's redeemed it must be spent by Oct. 14, 2015, or within 365 days, whichever occurs first.

The deal doesn't appear to be a hoax, as other Xbox 360 owners are also reporting seeing the ad.