Microsoft really wants Windows XP owners to realize that there is a serious threat in the continued use of the 12 year old OS which will see its support end on April 8th. In the company's latest version of its Microsoft Security Intelligence Report, it goes over some new statistics that show Windows XP is still a big target for malware.

Neowin got a chance to chat with Holly Stewart,the Senior Program Manager of the Microsoft Malware Protection Center, on Monday, prior to today's release of the new report. Stewart went over several bullet points in their study with us, including one that the company has never released in previous versions. The new section deals with the malware encounter rate among currently supported Windows operating systems (Windows XP SP3, Windows Vista SP2, Windows 7 SP1 and Windows 8 RTM). As you can see in the chart above, the malware encounter rate for Windows XP is actually lower than Vista or 7 and only a few percentage points higher than Windows 8.

However, the chart next to the malware encounter rate shows the actual infection rate among those same operating systems, and that's a totally different story. Windows XP's rate is 9.1 computers cleaned of malware per 1,000 PCs scanned. That's well above the 5.5 and 4.9 scores given to Windows Vista and Windows 7, receptively, and nearly six times higher than the 1.6 score for Windows 8.

Stewart told Neowin that Windows XP is still installed on 21 percent of all PCs worldwide, which means that over 2 out of 10 PCs are still running the OS. When we asked what the percentage was just in the US, Stewart told us that Windows XP was still being used by over 13 percent of all PCs in the country; which is still a huge amount for a 12 year old operating system.

We also asked Stewart how she felt about the recent announcements from Google and Mozilla stating they would continue to support their Chrome and Firefox web browsers, respectively, for Windows XP beyond Microsoft's April 8th cut off date. Stewart told us that while software companies can continue to support their products on Windows XP, the fact is that the OS will still remain vulnerable to malware once the April 8th cut off date is reached. 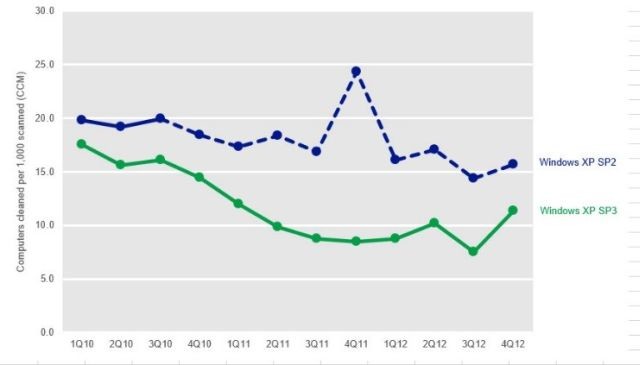 In fact, in another portion of the same report, Stewart told us that PCs that run Windows XP SP2, which is no longer supported, have a malware infection rate that is 66 percent higher than Windows XP SP3. Add it all up and it's clear that people and companies that are still running Windows XP need to upgrade to a newer version of Windows or else they significantly increase their exposure to malware.