According to Wired, Microsoft is the anti-Google. Both companies have their sights set on the cloud, but their approaches to getting there, and what they do once they get there, are fundamentally different.

To Google, the cloud is the computer. Who needs an office suite and a hard drive to store it on when Google has it all, safely tucked away in data centers and from all the 'dangers' of local system, only a click away. So long as you have internet access, that is.

Right now, the simple reality is that cloud apps just don't match what is available on the desktop, neither in form nor function. They have their advantages; portability, simplicity, and safety, but their abilities are basic compared to what local suites, like Microsoft Office or Apple's iWork, are capable of. This is where Microsoft believes their approach comes out as a clear winner.

Some might say that Microsoft isn't serious about the cloud. Kurt DelBene, the head of Microsoft's Office division, thinks that's a silly question. “We're as serious about the cloud as we are about evolving our businnesses,” he said. And yet Office Web Apps, which is available as part of Office 365, Microsoft's subscription based cloud service, as well as to consumers as part of SkyDrive, is far less capable than anything that users can get on their desktop.

DelBene says this doesn't have anything to do with cutting into Microsoft's bread and butter, namely selling copies of Windows and Office. “I tell my team specifically, do not worry about whether you're going to harm the viability of the Office applications.” It's all about offering users the most flexible and powerful experience possible, and only Microsoft is in a position to deliver that. They're the only ones who can deliver on the cloud and the desktop.

The great flexibility of the cloud comes from its portability. It's everywhere and nowhere at the same time, ready to beam down whatever files it's storing for us at a moments notice, wherever we might be, on whatever device we might be using at any given moment. Office 365 comes with tight integration to Microsoft's on-premises offerings, but DelBene doesn't think that it's any less flexible than Google Apps. 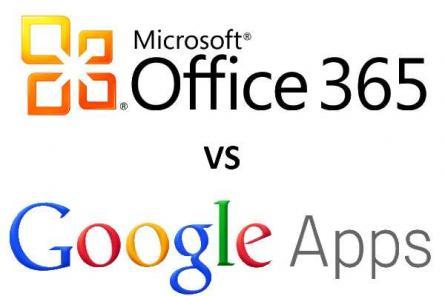 Most of the time, given a choice, users had rather get their work done using a full featured suite, but they also need the flexibility to be productive from anywhere, on any machine. Using web apps, whether they're from Microsoft or Google, they can get just that; the basic features they need when they don't have access to their main PC. On the other hand, that doesn't mean throwing away all of the features offered by the desktop in favor for a more flexible but less powerful experience in the cloud. Microsoft is offering the best of both worlds.

“That kind of occasional use is something we think web applications are actually quite good at,” DelBene said. “In most cases, we do see almost everybody goes to the web apps, but they use the rich clients [desktop applications] as well.”

Google scoffs. “Microsoft is trying to extend its client-server model to the Web, which is a very hard thing to do. Google Apps is based on entirely modern technologies designed for today's world." Yet Microsoft keeps on marching, and it remains to be seen whether its out of fear for its current business model, or because it knows that its approach will win out in the end.

ZDNet's Joe McKendrick compares Microsoft's current position to that of IBM in the '80s and '90s. Even though it made most of its money selling mainframes (think Windows, or Office), IBM chose to market itself as everything from a PC company to an UNIX company. In the end, IBM finally realized where its greatest strength lay, and managed to keep that strength relevant, even in today's world of tiny, integrated systems.

Maybe Microsoft already knows this. Right now most users, even if they do make heavy use of the cloud, depend on their desktop or laptop to get most of their work done, and to get them into the cloud. It just so happens that most of these devices are powered by Microsoft's software. In Google's approach, the hardware becomes little more than a dumb terminal, used to access their content in the cloud. But perhaps that's not a route that businesses are quite ready to take.

Just maybe Microsoft's greatest strength, which happens to be what some consider its greatest weakness, a supposedly shrinking business, will turn out to be its greatest asset to cloud dominance.

Storm clouds are brewing (pun absolutely intentional), however, and an epic battle is brewing, and the victory, whether it's Microsoft, Google, or some unknown waiting in the shadows, is far from clear.