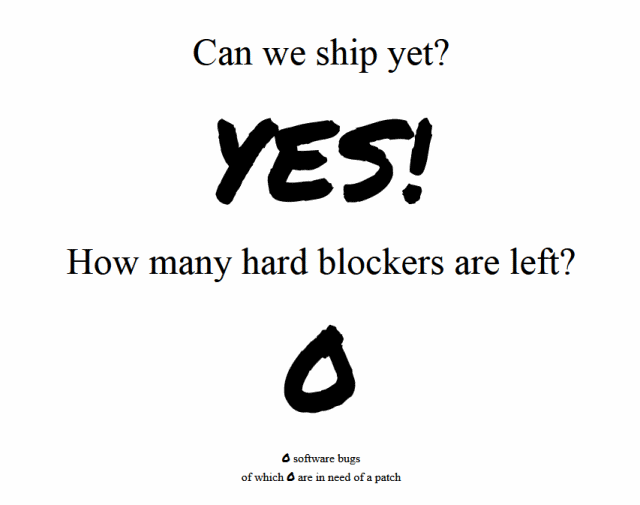 In a posting on Google Groups, Developer Benjamin Smedberg said in a message to fellow coders that the Mozilla developer hub was "now closed so that release engineering can prepare Firefox 4 release candidates."

And this was further confirmed when the CanWeShipYet website showed no blockers or pending patches, late last night.

Per the triage meeting today, mozilla-central is now CLOSED so that release engineering can prepare Firefox 4 release candidates. This means that NO CHANGES may land, even things which may have Firefox or Mobile
blocker flags.

Rob Sayre is preparing a plan for the mechanics of how we reopen the tree for both pending changes for Firefox Mobile 4 and new work for Firefox 5. This includes all the related details about how we manage nightly testers, branching, feature landings, and the schedule. Until this plan is finalized, the tree will remain absolutely frozen.

Please direct any followup to mozilla.dev.planning

In what for some seemed like a long winding road, the end is finally in sight and we can all expect to see the Firefox 4 in all its glory this month.

Firefox 4, based on the Gecko 2.0 engine, will bring an updated user interface, new ways to organize tabs, a revamped add-on manager, support for HTML5 video standards, multitouch support on Windows 7 and a range of performance and security enhancements.

Don't forget that you can discuss this beta, and nightly builds right here on Neowin in the "Meet Firefox 4.0 (beta 12)" topic.