It was not long ago that projectors were exclusive to the professional work environment and die-hard home cinema enthusiasts who were not afraid to spend large sums of cash. Even today, higher-end projectors can attract four figure asking prices.

Thankfully, today we consumers are spoilt for choice, multimedia projectors catering to nearly any budget, and coming in many different shapes and sizes are readily available. 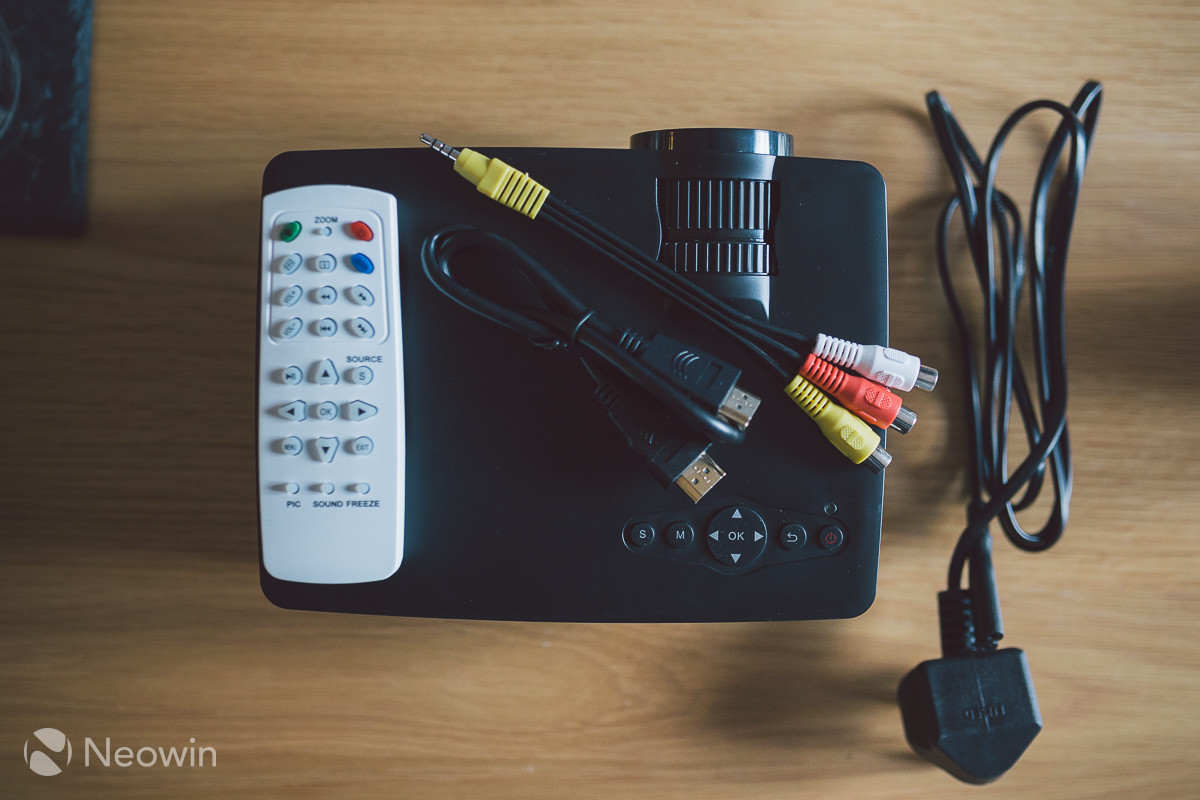 The important question is, are they any good? Usually the term "you get what you pay for" comes to mind when referring to cheaper devices like these, but there are exceptions from time to time.

I think Mpow's 1200 lumen projector could be one such exception. At under £65 ($82), it is affordable and comes with a decent feature list.

Sadly, the Mpow projector is only for sale on Amazon UK, but Mpow has generously offered our readers a 10% discount using the code FOJ8FU75 at checkout for the festive period.

Amazon USA buyers can, of course, look at alternative brands that appear to be very similar in spec, and at a similar price.

This projector is made entirely of plastic. The material thickness is not the same as more expensive projectors although, at this price, I can't complain really.

Accessories bundled in the box include a surprisingly well featured remote control, HDMI cable, and an analogue A/V cable. 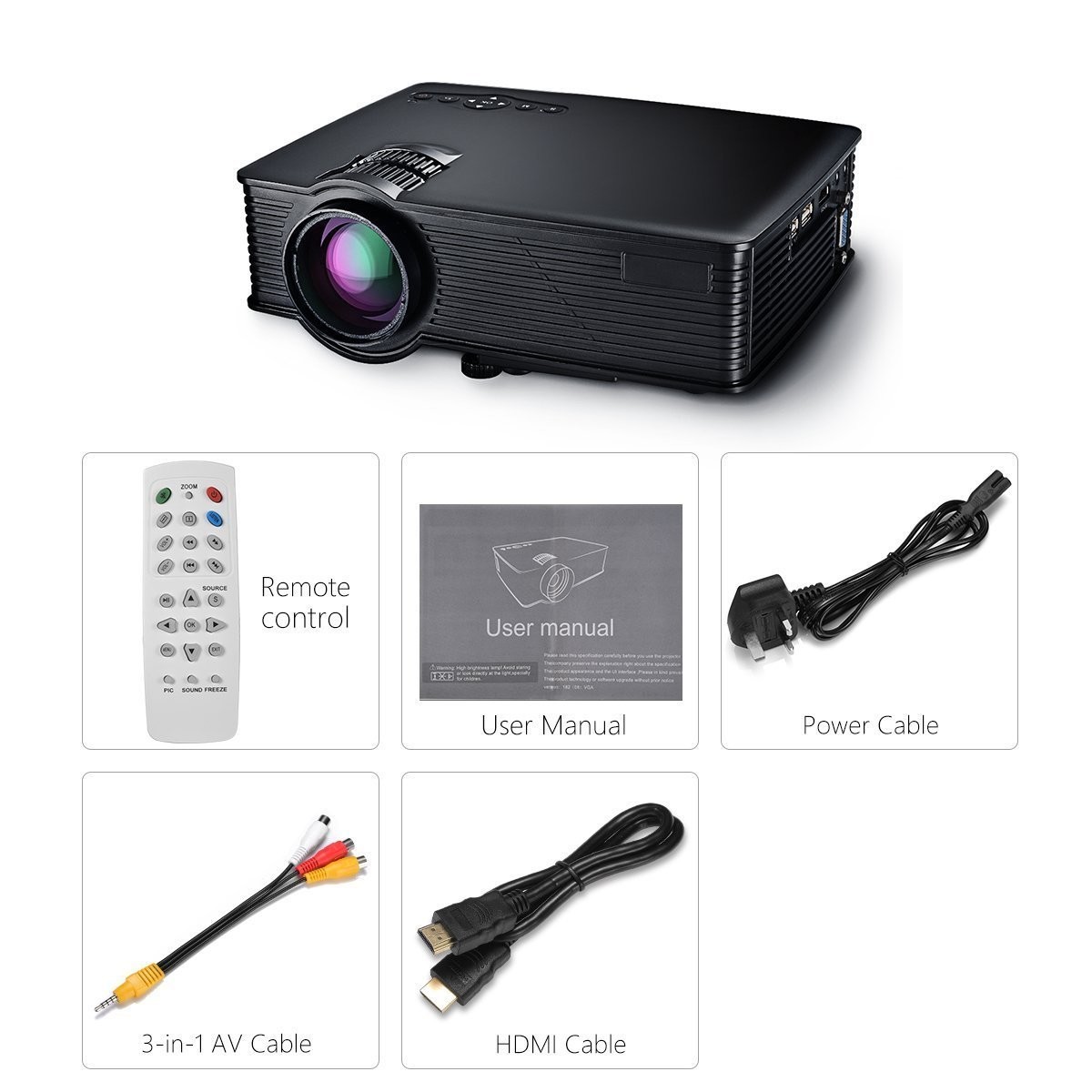 The underside has rubber feet, and there is a height angle adjustment screw which provides a couple of inches of vertical movement.

The top of the projector houses the most common controls, the same ones also found on the remote. 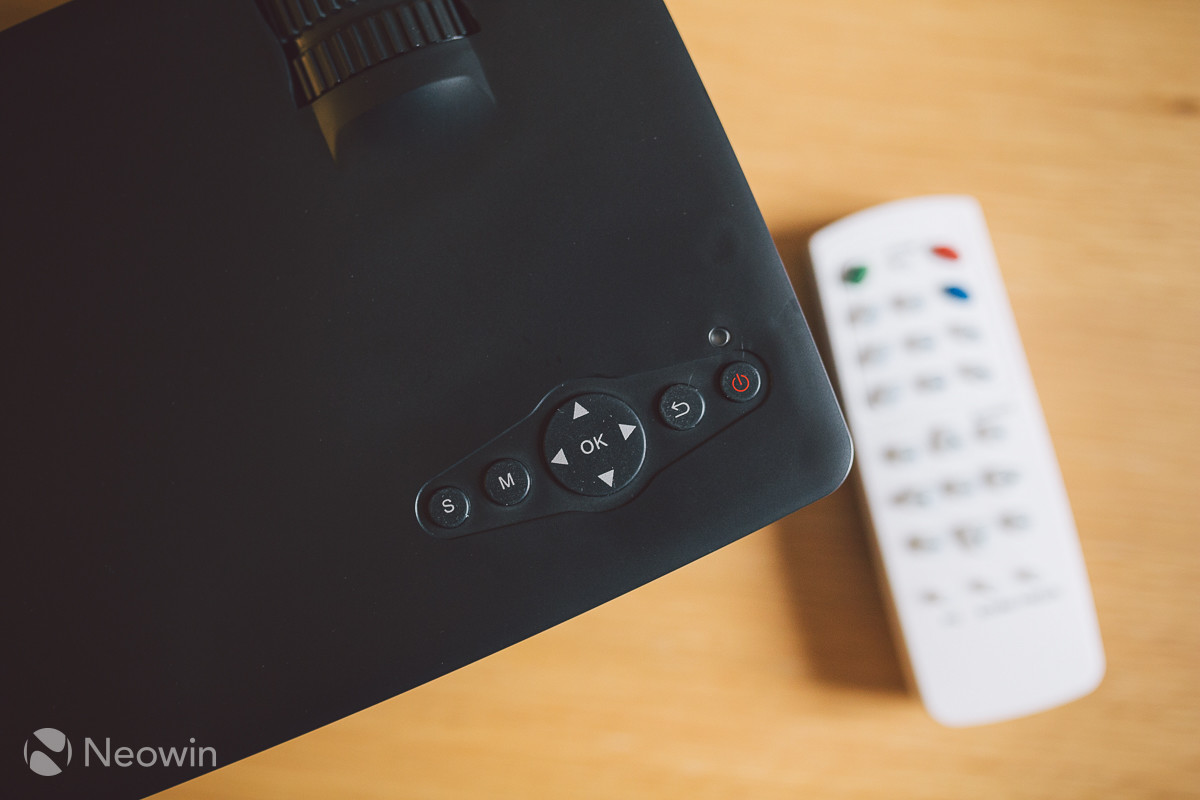 The ports on the side are all easily accessible and spread apart far enough to not get in the way of each other. This model has no Wi-Fi or DLNA features which would have been nice to see, but the price would likely have been higher if it did. 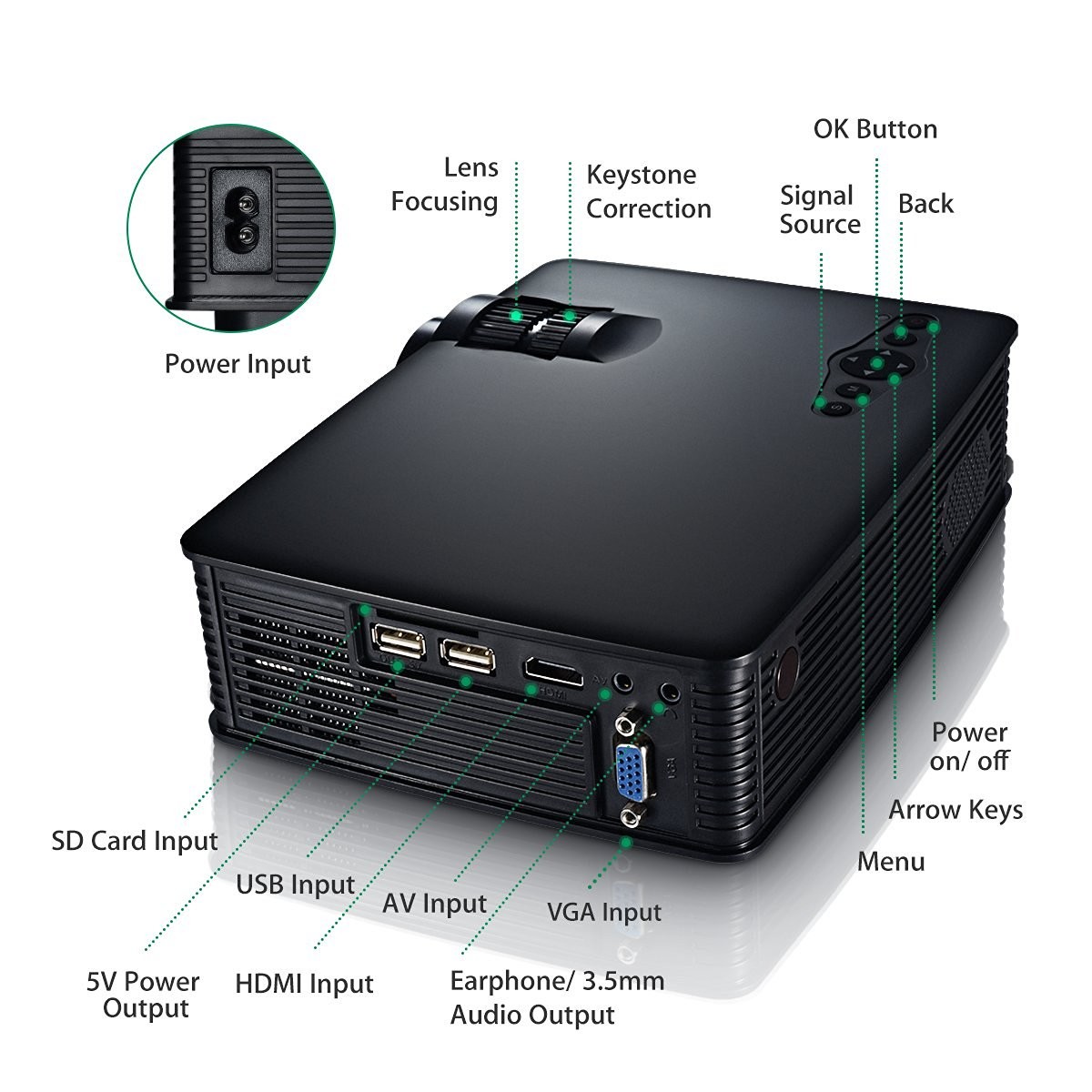 The lamp doesn't take very long to reach maximum brightness. In daylight with the curtains closed, I was able to play games on an Xbox One S and watch Blu-ray movies without issue. 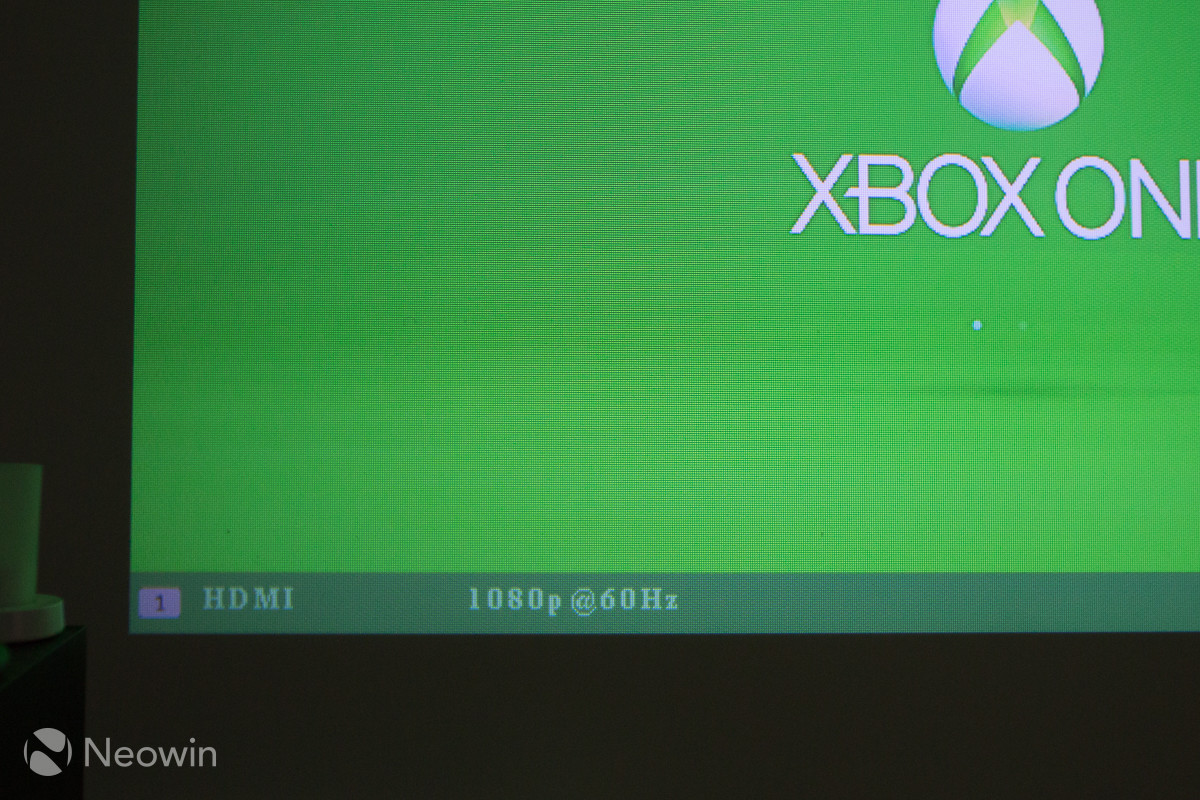 Even though the lamp is rated at a brightness of 1200 lumens, I would say the brightness isn't quite powerful enough to project a perfectly vivid image in rooms with bright lighting. This is a projector that is best suited to ambient room lighting. 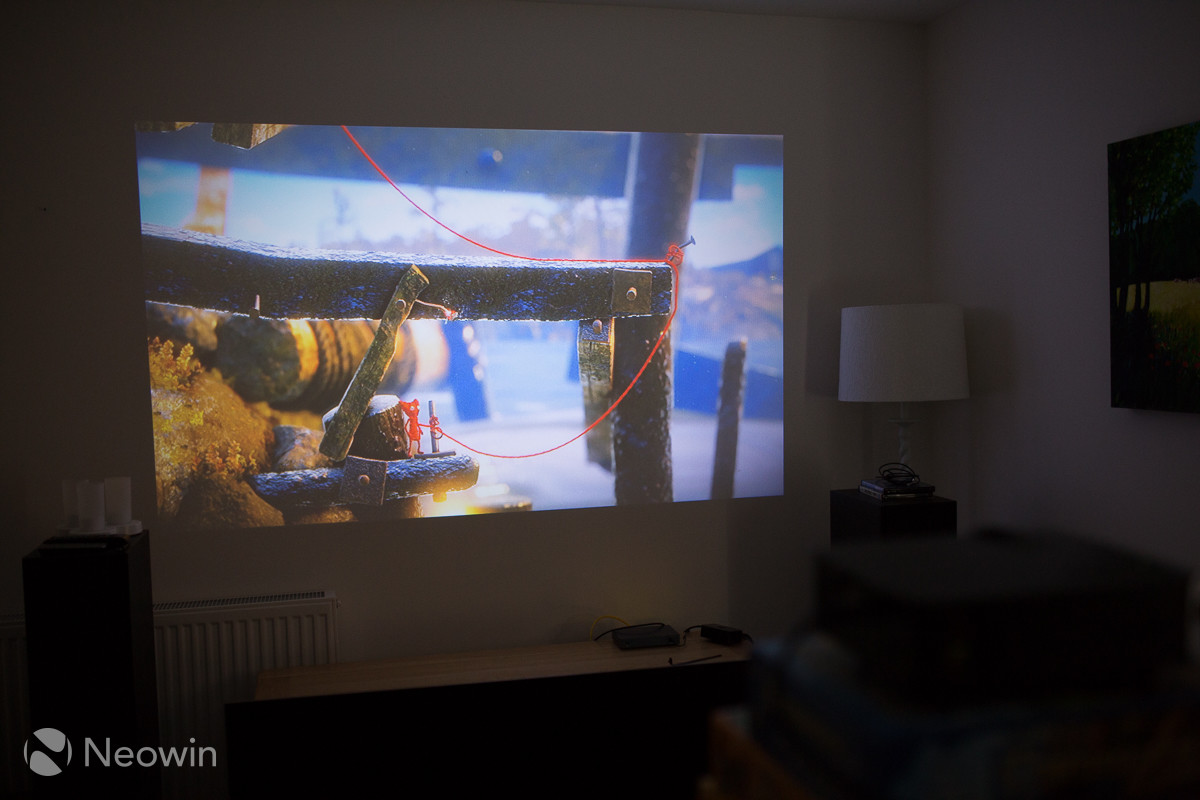 The resolution support states up to 1080p, and I can confirm this is at 60Hz. The internal display resolution is of course 800x480. Don't let this low figure put you off though, as the quality is good enough to game and watch movies.

I found there to be no sign of input lag, so gaming is enjoyable. 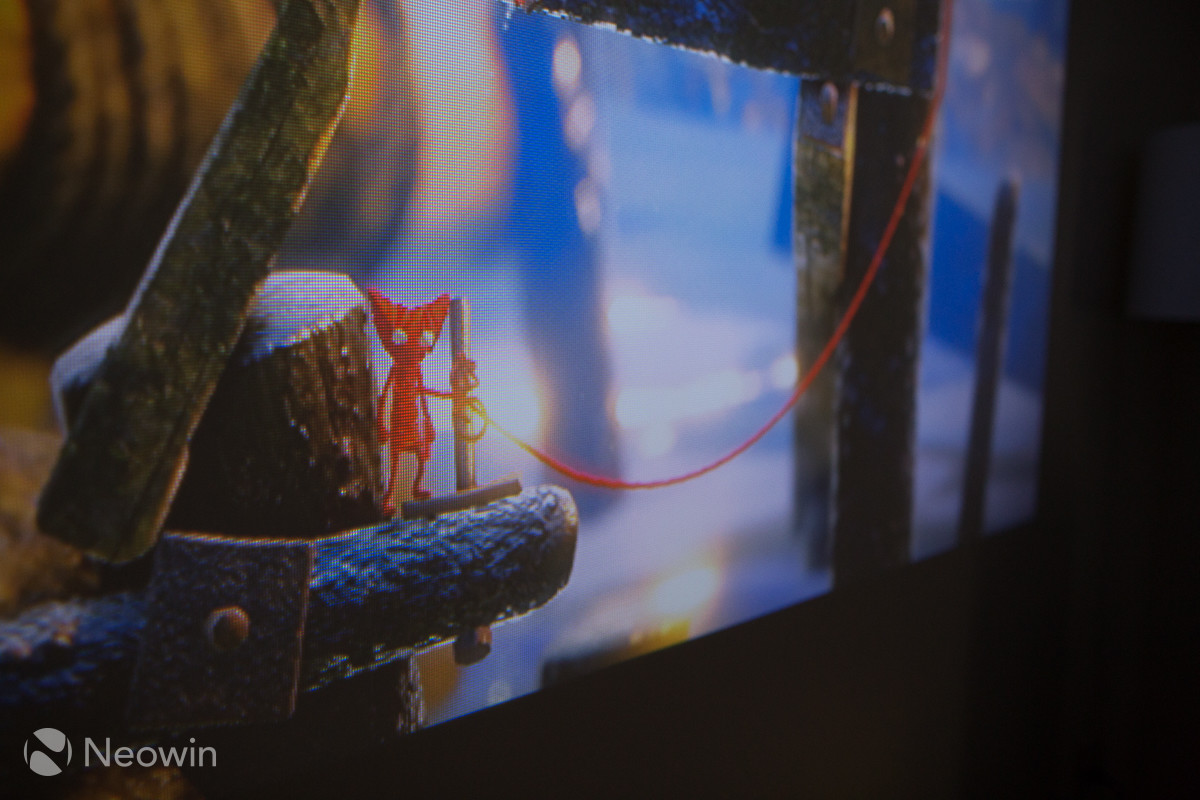 Effectively what is happening is that a higher resolution input source is being downscaled to the native resolution. Sitting back on the sofa, the image is clear and sharp. But individual pixels can be seen if you stand right up to the wall, which is to be expected.

The Revenant is one of my favourite movies of 2015. The cinematography is outstanding, and best viewed on a big screen. I was keen to see what it looked like on a projected image nearly 80 inches across.

Here is a scene that has a good variation of shadow and highlight areas within the frame. 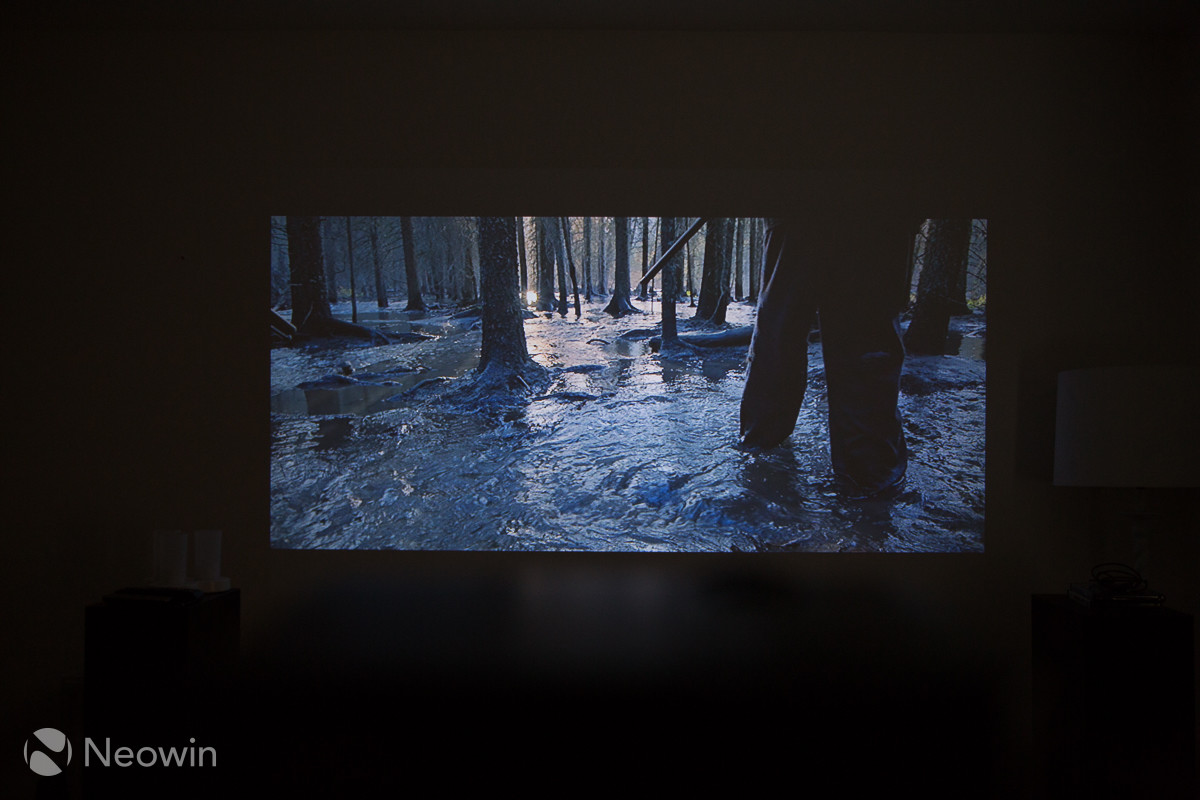 Not too bad, if perhaps a little washed out at times, as the black levels get crushed into the mid-tones of the scene.

There are plenty of options for picture and sound to play around with to fine-tune the end results. The audio output feature is welcome because, to be honest, I found the built-in 3W speaker to be quite poor. So connecting it up to a Hi-Fi or AV receiver is going to the best option.

I noted earlier that this does not have any wireless connectivity, which is a shame because connecting it via Bluetooth to a portable speaker would have made this the perfect outdoor party piece for dusk/night-time entertainment. 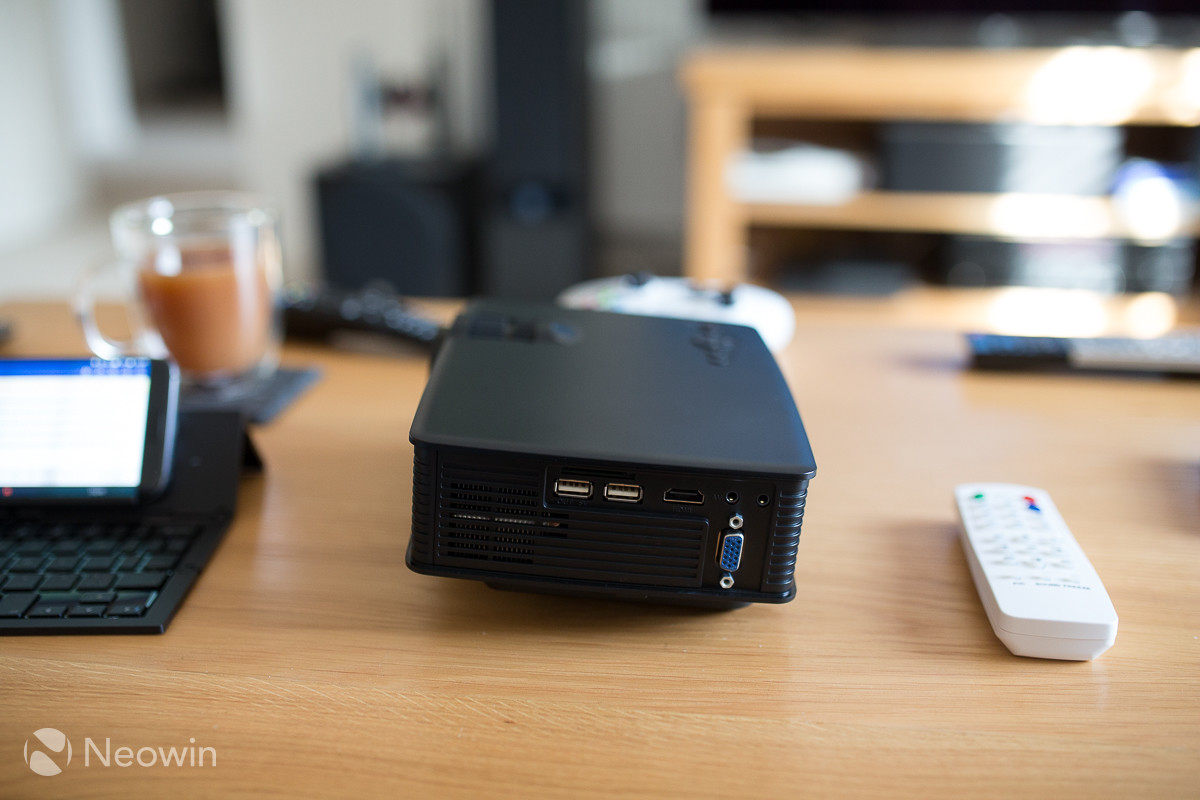 Local media file playback is also possible via the USB ports and SD card slot. All the standard file formats are supported as you would expect.

There is a fan which keeps the internals cool during operation, and I timed the cooling down period when the projector is turned off at 10 seconds thanks to the LED lamp and heat pipe cooling.

As a flashlight geek, I have several 1,000+ lumen LED torches, and know that these do get very hot at full power. The projector's fan and passive cooling system keeps the unit cool during long periods of operation. In fact, the only sign of warmth is when you place your palm in front of the heat exhaust vent.

Images showing the menu options available, as well as other angles of the projector can be found in the gallery at the bottom of this page.

Mpow's projector is cheap and cheerful. It provides excellent game console performance, along with decent (for the price) movie playback.

The remote control and menu options offer a host of configuration options to play with, and the media input support is good. It is just a shame that there is no wireless connectivity built-in, even if it were to cost a small amount more. It is nearly 2017, I think it is expected to be able to wirelessly transmit media to such devices.

Of course, there is nothing stopping you from connecting a Chromecast to the HDMI port, and beaming content from a phone or tablet directly.

The built-in speaker is subpar to the point where a cheap smartphone speaker offers greater loudness and higher fidelity. This review unit also had a dodgy power connector where one side unclipped itself slightly when taking the cable out of its socket.

On one hand, you are getting what you pay for. On the other hand, the picture quality is good, as is the features list.

Flaws aside, it is a decent projector that might find its way into a games room, or carry bag for those work presentations when on-the-go.

I think for under £65, it is a bit of a bargain, moreso with the 10% discount offer. There is no need to worry about replacing an expensive bulb, or even breaking it at this price.