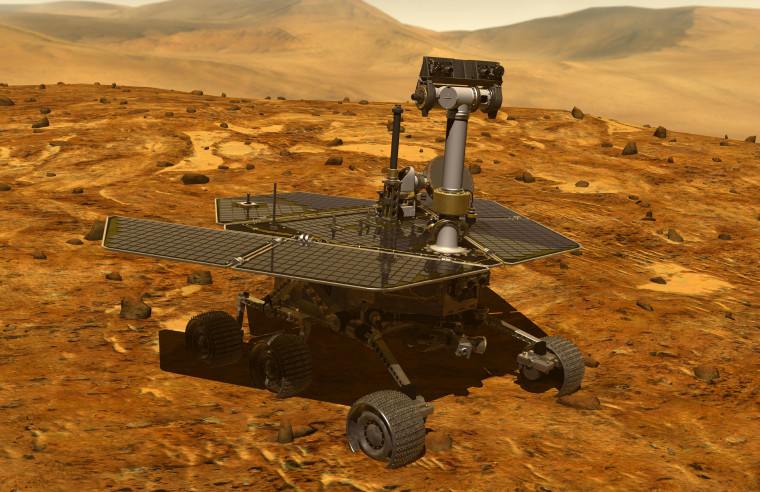 At NASA's Langley Research Center in Hampton, engineers have been developing an inflatable heat shield that looks a lot like a large version of a stacking ring of doughnuts that children play with. The NASA engineers believe that a lightweight, inflatable heat shield could be used to slow the craft in entering a Martian atmosphere that is much thinner than Earth's.

The inflatable shield could help a spacecraft reach the high-altitude southern plains of Mars and other areas that would be inaccessible under existing technology. Experts note that rockets alone cannot be used to land a large craft on Mars similar to what is done on the moon due to the differences in the atmosphere.

"The rings would be filled with nitrogen and covered with a thermal blanket. Once deployed for landing, the rings would sit atop the spacecraft, somewhat resembling a giant mushroom.

'We try to not use propulsion if we don't have to,' said Neil Cheatwood, the senior engineer at Langley for advanced entry, descent and landing systems. 'We make use of that atmosphere as much as we can, because it means we don't have to carry all that fuel with us.'"

NASA's leaders currently acknowledge that a manned roundtrip to Mars as early as the 2030s will pose extreme challenges. The agency's scientists realize that they must also design new in-space propulsion systems, advanced spacesuits, long-term living habitats aboard spacecraft, and also communication systems for deep space to make the trip viable.

New technology is needed to get astronauts to Mars because a manned spacecraft would need to be much larger than anything that's landed on the planet previously. Current heat shield technology weighs too much to be on a larger spacecraft, which means that scientists can't land anything much larger than rovers that have already been sent there previously. NASA has relied on parachute-based deceleration on Mars since the 70's - something that would not be viable for manned missions.

"Engineers at Langley have been working on the inflatable technology for about a decade, and believe it is close to being ready for operational use. 'If I had the budget and we had the funding to do it, I think we could get as large a scale as needed for humans in five to ten years,' Cheatwood said."

Cheatwood continued that the same inflatable technology could also be used for ships to explore other planets or objects with atmospheres - such as Venus, Titan, and Jupiter.

Smaller scale, inflatable experiments have been launched on rockets previously, but never into orbit. That work was recently part of a NASA review in October of last year. The information gathered from those projects will be applied to a larger-scale experiment coming in 2016.

While it still won't be large enough to protect a manned spaceship, NASA scientists believe the technology is sound.