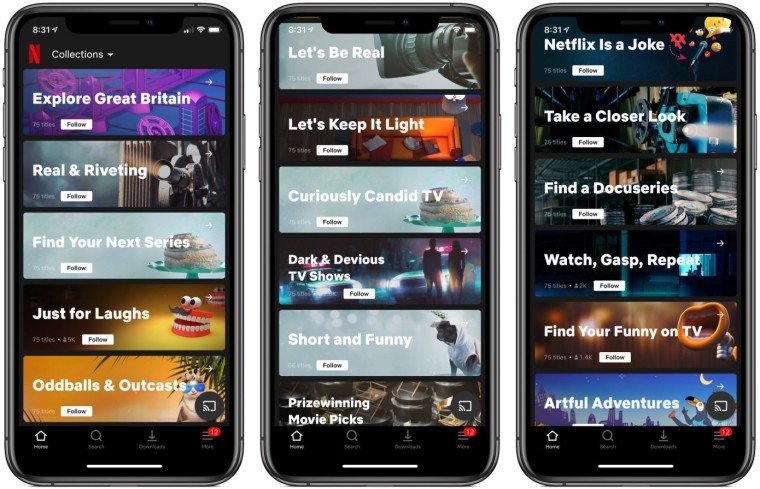 As the streaming wars heat up, Netflix is looking for new ways to improve its service to better compete against upcoming rival services from Disney, Apple, WarnerMedia, and others. The company is testing a new 'Collections' feature, where users can browse movies and tv shows that are curated by expert editors instead of the algorithms that currently serve up content in the Netflix recommendations pane.

The new feature, which was first spotted by Jeff Higgins on Twitter, is only being tested with a small number of iOS users for now. Netflix says that factors such as genre, tone, story line and character traits are used to organize the titles. Some of the collections spotted so far include 'Short and Funny', 'Artful Adventures', 'Dark & Devious TV Shows', and 'Oddballs & Outcasts'.

Here's a look at the smooth transitions in the new Netflix Collections 👇 pic.twitter.com/5xPYRheCqn

The new Collections option is located on the top right corner of the app. When you tap a collection, it expands to show a brief description of what the included shows or movies are about, followed by thumbnails of the titles it contains.

A Netflix spokesperson noted that that as is the case with all of the company’s tests, there is a chance that the new option does not become a permanent feature on the service. Interestingly, the company’s less used DVD service has already implemented a similar Collections feature in its own mobile app.