Only a couple of weeks ago, figures from StatCounter seemed to indicate that only Windows 7 stands in the way of Windows 10's rise to dominance since being released last July. And now, new figures from NetMarketShare for January 2016 confirm these findings, albeit with a small twist.

According to NetMarketShare, Windows 10 has now overtaken Windows XP in usage, with the former being used on 11.85% of machines, while the unsupported Windows XP is still installed on 11.42% of PCs. Windows 7 is still king at a whopping 52.47% of market, while Windows 8/8.1 can still be found on 13.08% of devices, despite the free upgrade offer of Windows 10 applying to this version and Windows 7 until the end of July 2016. 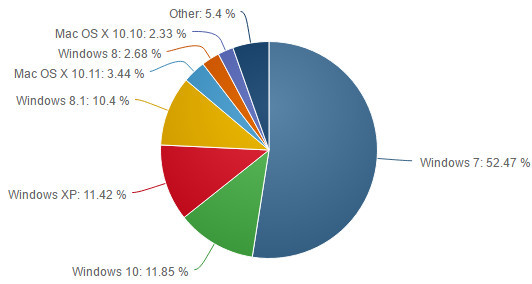 So now both NetMarketShare and StatCounter agree that Windows 10 is the second most popular Windows version, and that achievement has been reached inside the first six months of release, an impressive feat. Microsoft hopes to have its latest OS on one billion devices within three years, and if this trend continues, it's certainly not an impossible target.

We could see a surge in Windows 10 usage as the cut-off date to upgrade for free nears in just under six months time, but we'll know more once we're closer to July.