Inventory of Apple's MacBook Pros have been slowing to a halt lately on International Apple Store websites. The shipping times on several Asian country websites have been delayed from the standard 24 hours up to five business days. 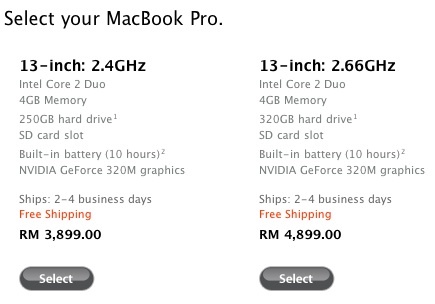 The last time the MacBook Pros saw a refresh was almost a year ago when they were updated with Intel's Core i3, i5, and i7 chips and are due for an update that will presumably use Intel's latest line of Sandy Bridge chips. Intel saw a snag in its schedule with releasing Sandy Bridge a couple of weeks ago but it reportedly should not affect Apple offering it in its laptops nor did the setback have anything to do with a flaw in the chip's design.

Rumors about new MacBook Pro models being released by the end of the month stemmed from Italian site iSpazio (which also claimed the following as the new MacBook Pro product numbers: MC720, MC721, MC723, MC724, and MC725). Now, both MacRumors and AppleInsider have learned that the information is actually accurate; MacRumors cites next Thursday, February 24th, as the date we will see the refresh. February 24th is also Steve Jobs' birthday.

Speculation about other upgrades to the new laptops have not gone farther than the all but confirmed Sandy Bridge update, though many expect hard drive upgrades and a possible new unibody chassis. If the Thursday date is to be believed, however, Apple redesigns are usually accompanied by a media event and there have yet to be any invitations sent out. However, it won't be the first time Apple sent invitations a little too close to the event date nor the first time they redesign a product without an event.

If you're thinking about buying a MacBook Pro, you may want to hold out just a little bit longer.