While the brand spanking new Lumia 630 is enjoying its time in the spotlight - as the first Windows Phone 8.1 device to go on sale - it's not the only choice for those seeking a low-cost Windows Phone handset. In fact, if you shop around, you may be able to find some pretty tasty deals out there. 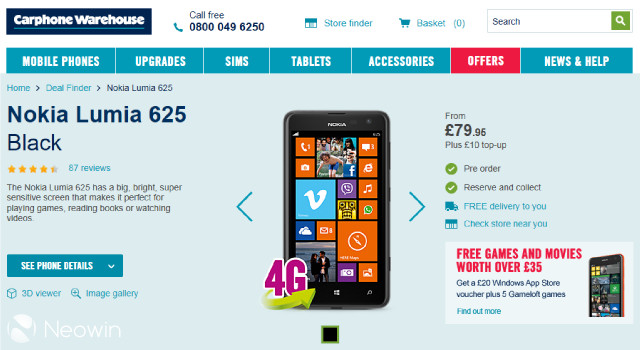 Over on Windows Phone Central, they've spotted one such bargain in the United Kingdom. The Lumia 625 is currently on sale at Carphone Warehouse for just £79.95 - and considering it went on sale in the UK less than a year ago priced at just under £250, that's quite a saving.

If you can't quite remember what the 625 has to offer, let us refresh your memory. Despite its low price, the device has a large 4.7-inch IPS LCD screen with WVGA (800x480px) resolution, protected by Corning Gorilla Glass 2. It features a 1.2GHz dual-core Snapdragon S4 chipset, along with 512MB of RAM, 8GB of onboard storage and a microSD slot (accepting cards up to 64GB).

Unlike many low-cost devices, the 625 also includes 4G LTE support, compatible with all UK networks. There's also a 2000mAh battery and 5MP rear camera with flash, plus a VGA front-facing camera for those all-important selfies. And while the handset was launched with Windows Phone 8, it's fully upgradeable to the latest version of the OS, Windows Phone 8.1.

As you would expect of a Nokia handset, a range of colours is on offer too, through interchangeable shells that can be easily removed and switched. The white version has apparently already sold out at CPW, leaving only the model with a black shell in stock, so if you're considering grabbing the handset at its current price, it's probably best not to leave it too long before stocks run out entirely.

Bear in mind that you'll have to purchase a £10 pay-as-you-go credit top-up with the device at Carphone Warehouse, so although the handset itself costs £79.95, you'll be paying £89.95 at the checkout. Even so, you'll get five free Gameloft games worth £16.75 as part of your purchase, plus a £20 voucher to spend on any apps and games from the Windows Phone Store.