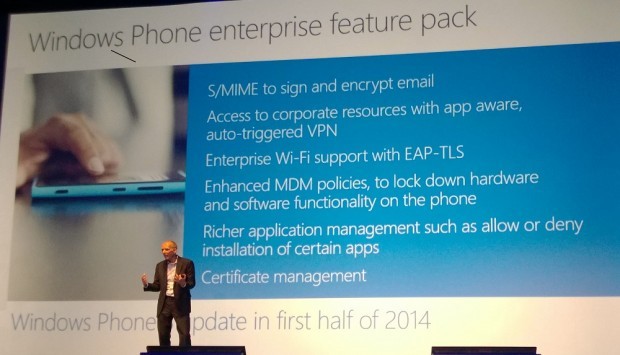 Windows Phone has gained some serious momentum in the last year but Microsoft is not content with that. The company says it wants to have the number one mobile platform for business and enterprise customers.

Talking to Mobile News, Leila Martine, Windows Phone UK director, said the company is looking to push the platform a lot further when it comes to enterprise market share. Microsoft wants Windows Phone to become the most used OS in the B2B (business to business) market by the middle of next year.

According to Martine’s comments, Nokia, now part of Microsoft, currently accounts for around 18% of the UK enterprise market taking second place. However, it’s still far behind Apple who currently holds 35% of this market.

Windows Phone is set to take that top place in the next 12 months by exploiting its competitors’ weaknesses: fragmentation and security concerns on Android, pricing and lack of options on iOS. By mixing together affordable handset choices with great performance and much better enterprise support, Microsoft believes it can win this race in the near future.

If Microsoft is able to maintain Windows Phone’s recent momentum in enterprise and low-end markets, their mobile platform may finally graduate from its current “distant third” spot to a real contender on the global market. Which in turn will lead to better support and happier customers across the board.

We’ll be following Microsoft’s performance closely and keeping a watchful eye on the platform’s evolution during 2014 and beyond.