In recent days, there has been some confusion among certain users of Microsoft's OneDrive cloud storage, after some noticed that their free inclusive storage had dropped from 25GB to just 15GB. It's not the disaster that some might think it is, but to explain what's happening, we'll need to rewind the clock a bit first.

Back in April 2012, Microsoft downgraded the amount of free storage that it offered for its SkyDrive users, from 25GB to 7GB. However, for existing users of the service, the company did not want to simply walk all over their loyalty by screwing them over with the storage reduction, so it gave any user that was already signed up to SkyDrive the option to retain their 25GB of storage.

When Microsoft rebranded SkyDrive as OneDrive, everything continued as it was, but more recently, the company has made significant changes to OneDrive. Last month, it announced that it was dropping prices on extra OneDrive storage, with all new users signing up to the service now getting 15GB free, rather than 7GB. 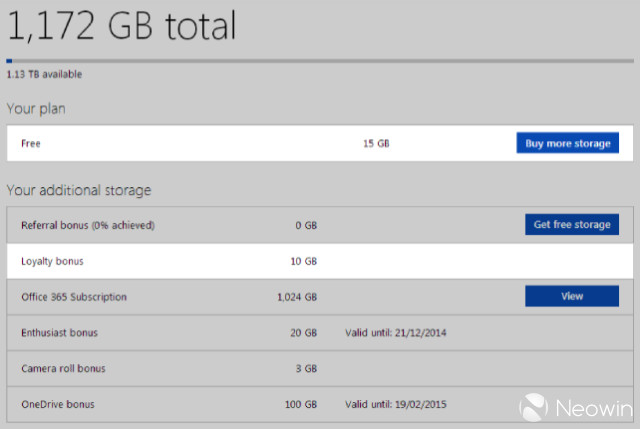 Fast forward to today, and there appeared to be a reduction in storage for those that were previously seeing 25GB of free storage, but who are now seeing only 15GB. This is simply the result of Microsoft changing the way that it itemizes the storage on your account, following the recent changes to its OneDrive tiers.

If you were one of those who got to keep their 25GB when it dropped to 7GB for new users in 2012, you should now see a new item on your OneDrive storage listing: "Loyalty bonus: 10GB". This loyalty bonus, added to the now-standard 15GB of free storage that everyone gets, brings your storage up to 25GB, just as before.

To put this another way, you're still getting 25GB of free storage - it's just presented differently.