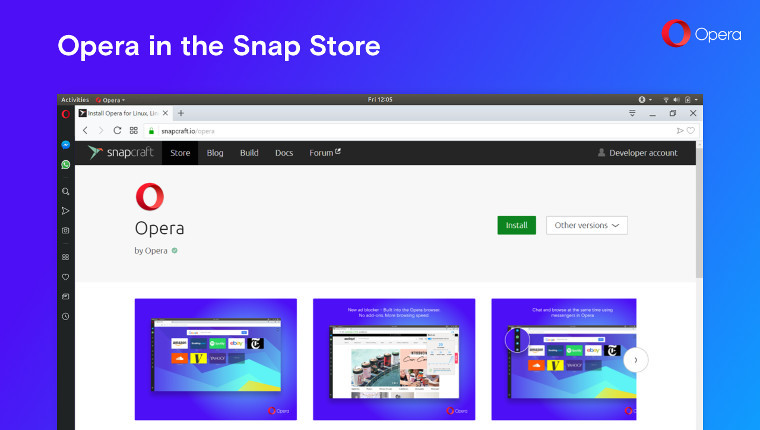 Opera and Canonical have announced the availability of the Opera web browser as a snap package. The well-known web browser is just the latest application to be packaged as a snap for Linux systems, it follows the likes of Skype, the collaborative platform Slack, and the music streaming app Spotify.

“We are happy to say that the installation of our browser on Linux just got easier than ever before.”

“We are delighted to welcome Opera to the Snap Store and further expand the choice of applications available to the Linux community. It is popular applications, such as Opera, that have driven the impressive growth of new snaps to the store and ever-increasing user installs over the last year.”

While snap packages are indeed Canonical’s baby, other Linux distributions support snaps too. According to the announcement, the Opera snap should work on Debian, Fedora, Linux Mint, Manjaro, Elementary, OpenSUSE, Ubuntu, and more.

Snap packages are containerised, meaning they come with all the requisite software needed to run and then does so sandboxed from the rest of the system. If anyone installs a snap that intends to act maliciously it will be inhibited from impacting the other contents of the system. The security of snaps was demonstrated in May when two snaps were allowed into the snap store, they were designed to act as cryptocurrency miners and load on system start-up, however, they weren’t able to mess with the system to preserve themselves so when removed they left nothing nasty on the system