More than seven out of ten iPhone app developers plan to launch applications for Google's Android mobile platform within the next six months, research by mobile advertising network AdMob has found. The survey also found that nearly half of current Android developers will also develop for the iPhone in the near future.

Out of the respondents to the survey, 31% said they were already developing applications for more than one mobile platform, and 47% are planning to develop on an additional platform within six months. Only 58% said they developed for the generic cross-platform mobile web.

The research also found that around half (49%) of the people surveyed had been developing on mobiles for less than a year, with a quarter having developed for between one and two years and slightly over a quarter (26%) at the two years plus mark.

Out of the developers themselves, 75% use an iPhone or Android phone, and they are most satisfied with the iPhone platform to develop for. 64% or respondents thought their apps were "very" or "somewhat" successful.

According to New Media Age, the EMEA MD of AdMod "also noted that devices using the Android operating system rank third and fourth in the most popular devices on AdMob’s network," with "10% of UK mobile ad traffic generated by Google Android users."

AdMob, conductor of the research and one of the world's largest mobile advertising companies, is currently in the middle of a $750m acquisition by Google. 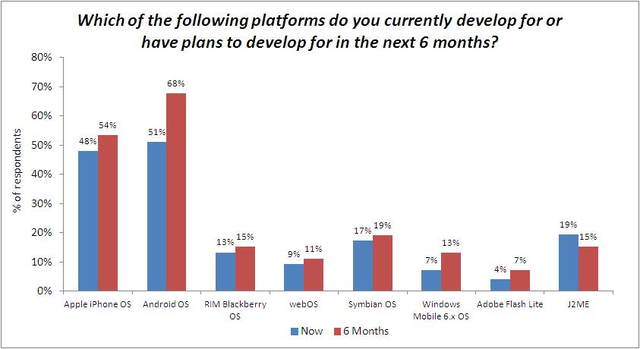