In the coming weeks Microsoft will release more updates to its Windows Live Hotmail email service. Recent updates have included POP access, an increase in speed and performance, a Windows Live Calendar update, an interface update, better spam protection, bug fixes, and other changes in response to feedback. On top of that, we can expect to see an integrated web messenger, access to other email accounts through POP aggregation, what's new feed integration, and unlimited storage.

So, what can we expect from the new instant messaging integration - also known as Windows Live Web Messenger, Windows Live Hotmail WebIM or Windows Live Messenger for the Web. When you first sign in to Hotmail you will be greeted by a new "Messenger" option. Clicking this brings up a menu allowing you to sign in to Messenger just for now or to automatically sign in whenever you are in Hotmail.

Hotmail acts as another location in Windows Live Messenger 2009's new MPOP (multiple points of presence) feature. This feature allows you to log in to Messenger on more than one computer at once and receive the same messages at each location. In addition to the Messenger PC client, locations can also include the Messenger feature on XBOX Live and now Windows Live Hotmail as well. 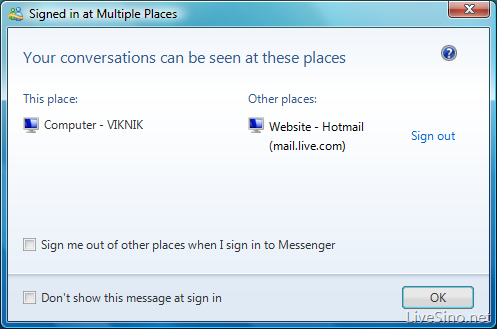 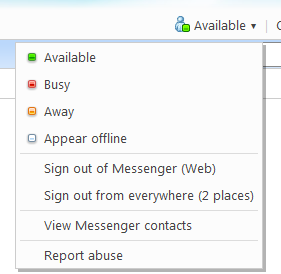 As with Windows Live Messenger on your PC, message "toasts" appear in the bottom right of the window giving you messaging related notifications and messages. The toasts in Hotmail also match the style of the theme that you have chosen.

Choosing to send an instant message to a contact opens up a new conversation window. This includes similar options to the Windows Live Messenger PC client such as emoticons, nudges and quick blocking of contacts, and the style of the window again matches your Hotmail theme. Display pictures for you and your contact should also appear at the side of the window which, although can't be seen in the image below, is visible in the default blank conversation window page, currently unofficially available to view if you are signed into Windows Live. 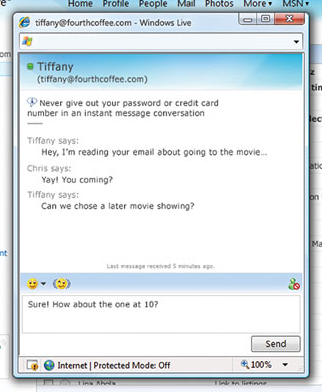 [Please note: the screenshots featured are from beta or dogfood versions or are mockups therefore the final product is subject to change. Thanks to LiveSide, LiveSino and Paul Thurrot for some of the images.]