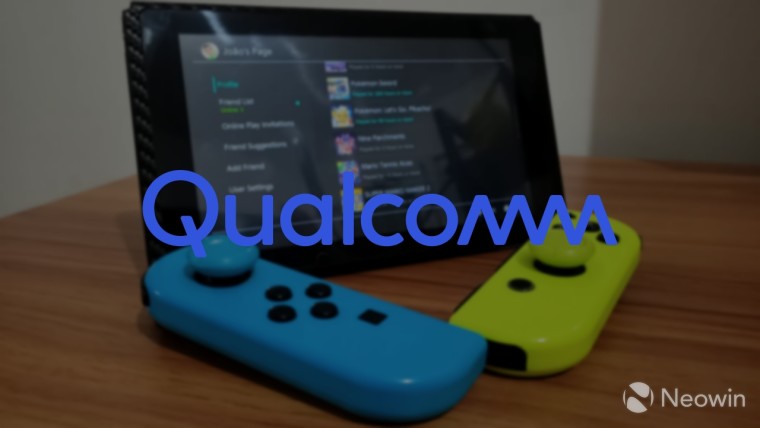 Since the Nintendo Switch has proven to be a raging success in the gaming market, we've seen a variety of takes on the hybrid form factor with devices like the recent Aya Neo or the GPD Win 3. However, most of these solutions run Windows 10, but that could be set to change soon. According to David Ruddock of Android Police, Qualcomm is working on a handheld console of its own, and it will be powered by Android, specifically the upcoming Android 12.

The console is currently planned for early 2022, and as far as the design goes, Ruddock says it bears a striking resemblance to Nintendo's hybrid. It has detachable controllers on the sides, and it's slightly thicker than a typical smartphone, giving more thermal headroom for the chipset as well as making room for the large 6,000mAh battery that it's said to pack. Actual pictures of the hardware weren't shared, however.

Dimensions for the display are unconfirmed, but it's estimated to be 6.65 inches across. Naturally, just like the Switch, the console will feature some form of display output, though it's unclear whether it will use a USB Type-C port or something like mini-HDMI to do it.

In addition to running Android 12, the console will have a custom launcher and it will include support for Google services, so you can get your games from the Play Store. On top of that, Qualcomm is hoping to be able to preload the Epic Games Store as well, giving players easy access to Fortnite and other titles from the company. That app store doesn't exist just yet, but Google has said it will make it easier to install third-party app stores with Android 12, so we should see it sometime after the new version of the OS is released.

As for the specs, since it's coming in early 2022, it's probably going to be packing whatever Qualcomm ends up announcing as the successor to the Snapdragon 888, which is found in today's flagship Android phones, and while it will support 5G, it's said that it will be using the older X55 modem. It's also said that it won't have any telephony features, so 5G connectivity would be meant for things like game streaming and online multiplayer. It will also have expandable storage via an SD card, as well as Bluetooth and GPS, plus sensors like an accelerometer and dual-zone haptic feedback.

Qualcomm is apparently trying to launch the rumored device at a $300 price point, matching that of the Switch, but it's unclear if that includes things like 5G support and the detachable controllers. It also doesn't look like Qualcomm wants to take Nintendo head-on, and instead the device is meant to inspire OEMs to come up with designs of their own. Still, the company is planning to sell the handheld to consumers, and even leverage some carrier partnerships to get more visibility for the console. However, there's still a long ways to go before the purported launch date, so plans could change between now and then.