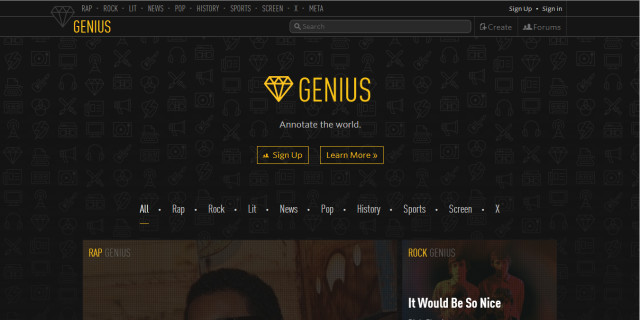 Rap Genius launched nearly five years ago with one mission: Break the mold of lyric sites and create accurate, in-depth annotations and explanations of popular songs. Even though there was a temporarily set back by an exile from Google for SEO spam, the site resurged and began expanding into other categories -- among them poetry, rock, and literature -- all while keeping the Rap Genius name.

But today, following an announcement from Rap Genius' cofounders, the highly-praised annotation site has confirmed that they are rebranding into 'Genius': an all-encompassing text annotation site with a focus not only on rap, but on rock, news, art, and even sports.

In a blog post, the founders commented on this rebranding, saying:

Perhaps more interesting is Genius' ambitious new endeavor which, while only sparsely discussed, has the potential to drastically change the function of many websites: tools that allow any webmaster to embed and annotate text on their site. The concept could be useful for places like Wikipedia, where in-depth theories might benefit from simple explanations, or even news sites, where in-text references to previous events could be annotated to explain how they relate.

Genius recently raised $40 million in a fundraising round including several high-profile investors (Marc Andreessen among them), and while the full extent of the site's ambitions may have yet to be realized, the founders and investors hope to eventually capture the spirit of their motto: 'annotate the world'.