Part of Microsoft's organizational changes, announced this week by CEO Satya Nadella, will see the company focus increasingly on delivering its apps and services to competitors' platforms. Of course, there are many examples of Microsoft software on rival operating systems already - from Office for Mac to Xbox Music on iOS and Android - and these will only increase in number over time.

The latest such example is not a mainstream release, but rather one from Microsoft Research, which has launched a new app for Android. Called 'Climatology', the app brings you climate information from anywhere in the world, focusing on three metrics: temperature, rainfall and sunniness. 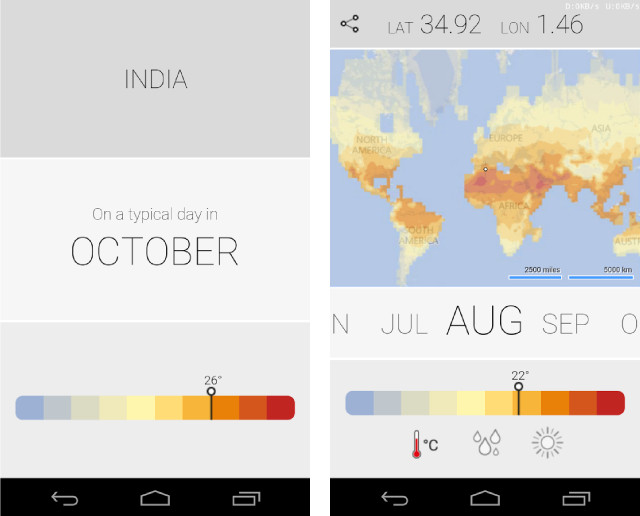 This is not an app designed to bring you the latest weather, or tomorrow's forecast. Rather, it focuses on broader trends in Earth's climate, using technology developed by environmental scientists at Microsoft Research. You can choose any location by zooming and swiping on the map, and then pick a month to display information for a particular time of year.

Microsoft says that this is an "experimental release", and it's pretty basic for now. We'll have to see whether the company plans to update it with additional features in the future. For now, hit the source link below to download it to your Android device.

Source: Google Play | Thanks for the tip, @jsyed55!

Update: The app has made it to Windows Phone - looks like it just took a bit longer to arrive in the Store than expected. You can download it here. Thanks to Neowin member articuno1au for the tip!