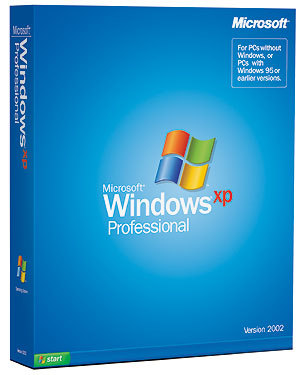 Today Microsoft's Windows XP operating system officially turns 10 years old. While PC makers started taking orders for new PCs with Windows XP installed a few weeks prior to October 25, 2001, this was the day that consumers were able to walk into a store and buy a copy of the OS in order to update their current PCs to the new version of Windows.

10 years later, Windows XP is still used on a ton of PCs around the world. This was due in part because Microsoft decided not to release a major new update to Windows until 2007 with Windows Vista. However, Vista never caught on with either businesses nor the public due to bugs and poor hardware driver support. As a result, many people didn't bother upgrading to Windows Vista and waited until Windows 7 was released in 2009 to update to a new version. Windows XP is just starting to lose its grip among PC users, according to recent statistics.

The world has changed a lot in the last decade and certainly the PC business has changed as it faces competition from new smartphones and tablets. But 10 years ago, Microsoft had people standing in line at their local software stores to buy their software. We now know that Windows XP turned out to be the most successful and the longest lasting operating system that Microsoft ever produced. But what were the reviews like at the time of its release.

CNet's review of Windows XP Home Edition, back on September 8, 2001, gave the OS four out of five stars. It said that the new user interface for Windows XP, as compared to Windows 95/98/Me, looked much different. It concluded:

While its new, hand-holding "task-oriented" design may annoy experienced users, Microsoft nevertheless managed to create an OS that works equally well for novices, corporate users, and enthusiasts. Despite hefty system requirements (a Pentium II-300 or faster, 128MB of RAM, and 1.5GB of free disk space), onerous product activation, and some not-so-obvious touting of Microsoft's business partners, you'll want to consider an upgrade--if not immediately, certainly the next time you buy a PC.

It's interesting to read about the "hefty" hardware specs for Windows XP now. Many smartphones that are on the market now easily exceed the processor, RAM and storage space that is needed to run Windows XP.

ActiveWin reviewed the Windows XP Professional Edition 10 years ago. Overall the web site gave the OS a review score of 84.9 (out of 100). It took down some points on its high price and also on its applications support. However, overall it praised Windows XP. The conclusion said:

Microsoft has listened to their customers by adding many new features they were requesting. Not only is Windows XP one of the most reliable operating systems ever released but it also offers an unprecedented level of conviviality thanks to a user friendly interface that includes smart enhancements to adapt the system to the way users work. In fact Windows XP is a treasure combining a marvel of conception, a gorgeous design, and innovative features; in other words: it's worth the wait!

From a PC gaming perspective, the FiringSquad web site posted its review on October 29, 2001. It gave it a grade of 85 (out of 100). Once again, Windows XP was slammed for some high system requirements. The review added, "The question simply comes down to whether or not you need and or want the new features that Windows XP offers. If you're a gamer and are satisfied with Windows 98SE, by all means, don't upgrade and risk losing the ability to play some of your favorite games."

Overall, Windows XP addresses many issues that users have been asking for and then some. For those lingering on Windows 95, 98 or NT4 machines, Windows XP provides a solid foundation on which to grow on. There's bound to be users who will upgrade no matter what we say, and realistically, Windows XP is a well designed, well implemented and well supported product. For the general population, you can't go wrong by moving to Windows XP, but you can't be 100% satisfied either.

The web site also went further and did a performance test of Windows XP with a number of games and benchmark tools. The final conclusion of those tests was also positive with FiringSquad saying:

After running these tests, and assuming that these benchmarks provide a decent estimate of what to expect, we can conclude that XP does not pose a performance risk. Most of the scores were either on par with Win2K or better than it. Win98SE took some leads in a few of the tests, but stability on that OS is something that is left to be desired.

Windows XP certainly had more than its share of support and popularity. But things are finally changing. Windows 7 is now firmly in place on a small majority of PCs in the world (depending on what statistics you use) Once more, Windows 8's release is on the horizon. Microsoft continues to urge people, especially large businesses, who have yet to upgrade from Windows XP to do so to Windows 7 and not wait until Windows 8 comes out.

Officially, Microsoft will no longer offer technical support nor any software upgrades to Windows XP after April 2014. Even though Microsoft will do its level best to get PC users to switch to Windows 7 or 8, it's more than likely that there will still be a large number of PCs around the world that will still run Windows XP. It just goes to show that if you make a successful and stable operating system, lots of folks don't want to fool around with a major upgrade if they don't need to.

Windows XP wasn't the only major launch for Microsoft. A few weeks later the company launched the original Xbox game console. But that 10th anniversary is the subject for another day.