Nokia is set to reveal its first Windows Phones to the world at its Nokia World convention tomorrow in London. Pictures of one handset, the Lumia 800 (known previously by its development codename ‘Sea Ray’), have been leaking all over the place, and now a new leak revealed to WinRumors appears to confirm that Nokia will also be launching a second device, known as the Lumia 710. 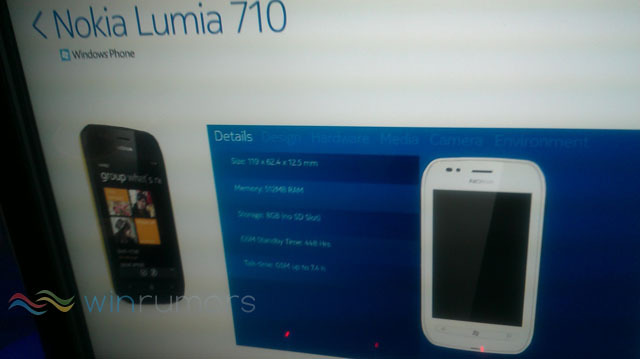 The Lumia 710 carries the tagline ‘designed around you’. Its 12.5mm-thick body includes 512MB of RAM and 8GB storage. It appears that the image states that there is "no SD Slot". It’s available in both black and white versions, and it appears to have physical front buttons, rather than the capacitive touch versions that feature more commonly on Windows Phone devices. 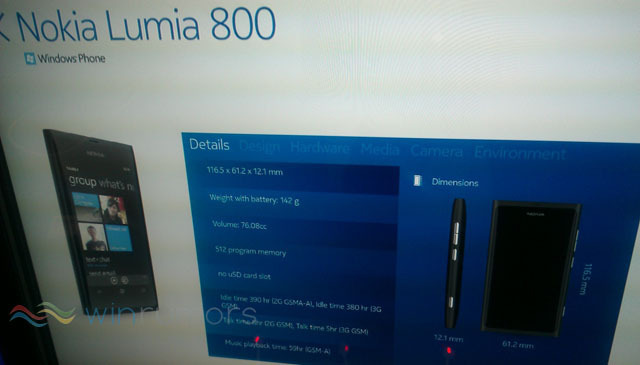 The Lumia 800 is tagged as offering 'continuous entertainment'. The dimensions quoted for this device (116.5 x 61.2 x 12.1mm) precisely match those of the MeeGo-powered Nokia N9. There’s 512MB of RAM again, but again no slot for a microSD card. No details are given on the on-board storage capacity here.

The images here appear to show either a website or interactive application of some sort (note the different selectable areas - Design, Hardware, Media), but it’s interesting that there’s very little consistency between the way information is laid out on the slide for each handset (details are given in different order, the depth of information differs between the two handsets, labeling is slightly different).

As with any leaks or rumours, it's best to take these with a pinch of salt, but at least there’s not too long to wait before we find out for sure if these are the real deal - the new devices will be announced in Stephen Elop’s keynote address tomorrow morning (0900, London time). They're expected to go on sale in several European markets within a couple of weeks - but US buyers will likely have to wait until 2012 before they get their first Nokia Windows Phones.

Update: It's worth highlighting (as no-one seems to have yet noticed) that the reverse of the Lumia 710 in the images above appears to be bright yellow. As far as the Lumia 800 goes, we've been led to believe it'll only be available in blue, pink and black. The yellow reverse of the 710 might indicate more colour options available for that model. The brightly coloured back of the handset is a bit more visible in this colour-saturated crop: 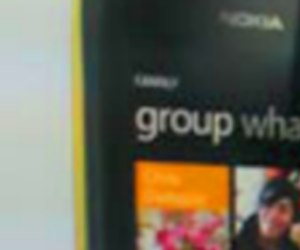