On Tuesday, Research in Motion showed off a prototype smartphone at its Blackberry World event running its upcoming Blackberry 10 operating system. The device had a 4.2 inch touch screen with no physical keyboard. However, it did have a very interesting new touch screen keyboard that offers suggested words to the user above each letter they type.

But the big question many who attended the event was whether or not RIM had completely abandoned its well known physical keyboard for its future smartphones. Now News.com reports that CEO Thorsten Heins told a group of journalists today that the physical keyboard isn't going away.

Heins said, "We never stated that we wouldn't build BlackBerry 10 devices with physical keyboards. We know what our strengths are. And it would be plain wrong to get rid of the physical keyboard."

However, a Blackberry 10 smartphone with such a keypad may not be the first one that's released by RIM. The story said that Heins stopped short of confirming it would be ready for Blackberry 10's launch later in 2012, saying only that some kind of physical keyboard will be part of the company's portfolio of Blackberry 10-based devices. 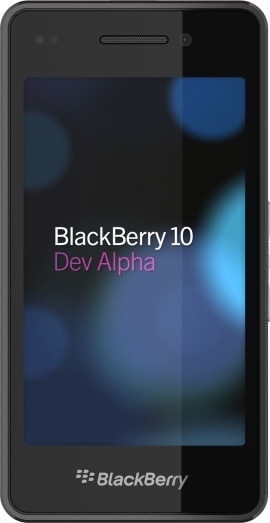 Heins also repeated that the prototype Blackberry 10 smartphone first revealed on Tuesday, and shown above, is not the final hardware unit. He also said he was confident that Blackberry will regain its lost market share for smartphones in the US, which it has lost thanks to the iPhone and Android devices. He stated, "We are here to win, and we're not here just to be in the game."