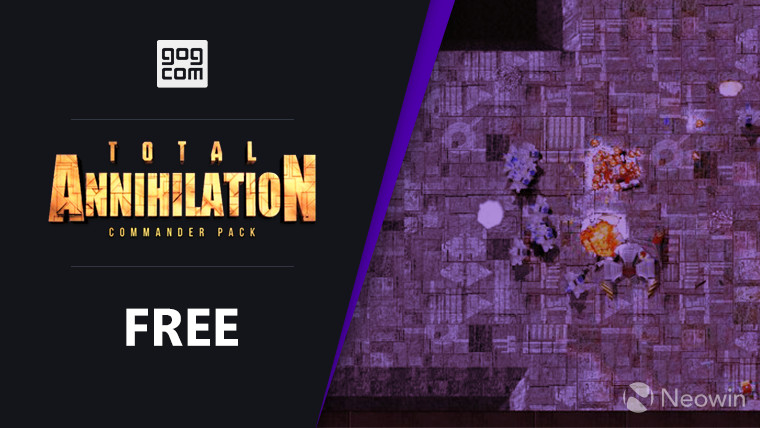 After opening the gates to this year's Summer Sale, GOG then went on to make Ascendant, Delores: A Thimbleweed Park Mini-Adventure, and 1996's War Wind completely free. Now, the DRM-free storefront has added yet another freebie to the mix, albeit for a limited time.

Developed by Cavedog Entertainment and published by GT Interactive in 1997 - with an eventual Steam re-release in 2015 -, Total Annihilation is the brainchild of Ron Gilbert - best known for his work on LucasArts adventure games and Double Fine titles -, and Chris Taylor. The last name may be familiar to folks who have played Dungeon Siege.

As part of the Commander Pack, beyond the base version of this classic RTS you also get its two expansion packs, The Core Contingency and Battle Tactics. Included are also the map editor, soundtrack, and for the nostalgic among you, the manual. You can claim it until June 7 at 1PM UTC - that's 9AM ET, 6AM PT in the States.

Although not on giveaway but with a substantial 80% discount, is Supreme Commander Gold Edition, making its DRM-free debut on GOG. Widely considered to be the spiritual successor for Total Annihilation, this particular edition packages both the base game and its standalone expansion, Forged Alliance. Supreme Commander 2 and the Infinite War Battle Pack for the game have been added too, though they only carry a 75% discount.

The GOG Summer Sale is still on until June 15 at 1PM UTC (9AM ET, 6AM PT in the States) with over 3,000 discounts. In case you want some more free games, there's a collection of permanently free titles that you can browse through.