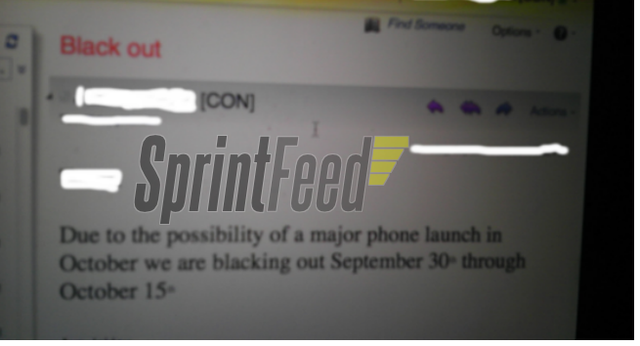 The biggest question on tech web sites is, "When will the iPhone 5 launch?" Apple's next version of its popular smartphone missed the usual June/July release date, reportedly due to parts supply issues caused by March's massive earthquake in Japan. Today, the SprintFeed.com web site has posted up the image of what is supposedly an internal memo that may show the time frame for the iPhone 5 launch.

The memo itself says, "Due to the possibility of a major phone launch in October we are blacking out September 30 through October 15." The term "blacking out" means that Sprint employees are not allowed to take any days off during that particular time period. As far as the unnamed "major phone launch," it's hard to imagine any smartphone other than Apple's iPhone 5 getting this kind of treatment in a memo.

If the memo image is genuine it certainly tracks with what other reports have suggested about the launch time period for Apple's next iPhone. It also seems to be a big hint that Sprint will indeed be the third US wireless carrier to begin selling the iPhone after AT&T and Verizon. An earlier rumor today also suggests that Sprint customers will be able to use the company's unlimited data plan for the iPhone 5, something that is denied for new customers at Verizon and AT&T. In the meantime the rumors and the guessing about Apple's iPhone 5 launch will likely continue until Apple itself sends out one of its media invites to its expected iPhone 5 press conference.