There's been a ton of different rumors about the next Xbox console, even though Microsoft is officially staying quiet about its plans for the successor to the Xbox 360. But what about the official controller for the next Xbox? It will certainly be tough to beat the current Xbox 360 gamepad, which in many people's opinion is the best game console controller ever made.

A new report on Kotaku states, via unnamed sources, that Microsoft started providing versions of the next Xbox's controller to developers who are making games for the console in March. The report claims that the actual design does not differ greatly from the current Xbox 360 game controller. All of the buttons, triggers and the D-pad on the Xbox 360 controller are available, and are in the same places, on the new gamepad, according to the report.

It does say that the next Xbox controller is slightly smaller than the current Xbox 360 gamepad but still has the same basic shape. The controller reportedly has no new buttons, like the "share" button on the PlayStation 4's gamepad. It also has no exotic features like the touchscreen on the Wii U gamepad or the touchpad on the PS4's controller.

The report does say that the developers' version of the controller is covered in black and white stripes that cross each other, similar to what you might find on a zebra. It's currently unknown why Microsoft made this decision, although it's possible that each pattern is unique and thus easy to trace in case one or more get "lost", only to find themselves in an online auction. 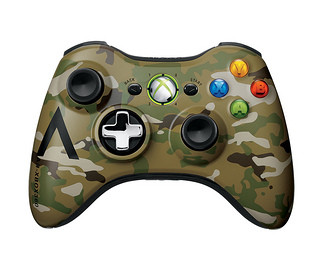 Yes, Microsoft is selling this Xbox 360 controller next month.

In other Xbox news, Microsoft announced a few days ago it will be selling an Xbox 360 controller that will have a camouflage art style; it will be sold exclusively at Walmart stores starting in May for $54.99.