Apple's latest iPad is available now, and you know what? Samsung feel they don't need to release something new to compete with it, according to their latest assessment of their closest rival. The Android-based Galaxy Note 10.1 is Samsung's latest tablet model, taking its design from the Galaxy Note 'phablet', which is just about the right size to be a challenge to fit into your pocket. Our own Tim Schiesser reviewed the Galaxy Note phone upon its release, and the complete review is here. 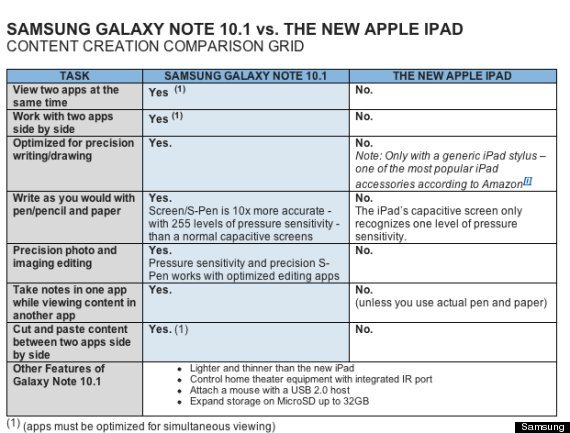 Samsung's Galaxy Note tablet was released in February to a widely positive reception from technology websites and blogs. As the Huffington Post correctly observes, CNET's Jessica Dolcourt highly praised the tablet for taking a different approach to what is rapidly becoming a well-saturated computer market.  If you really want to be picky, there are actually some tangible benefits to the Note over the 'resolutionary' new iPad. It actually is marginally thinner and does things a little differently, but the marketing? Maybe not so great, Samsung.

While it is nice to see two big companies vying for every last bit of power they can hold over the mobile market, Samsung really could do with finding a better way to express themselves. Their recent advertising campaigns have included the concept of being 'Samsunged', as Apple fans apparently convert when they experience a Galaxy handset, and their disputes with Apple are still very public. While the patent war seems to have slowed down slightly, the actual conflict between two of the giants of the mobile industry doesn't seem to show any signs of slowing.