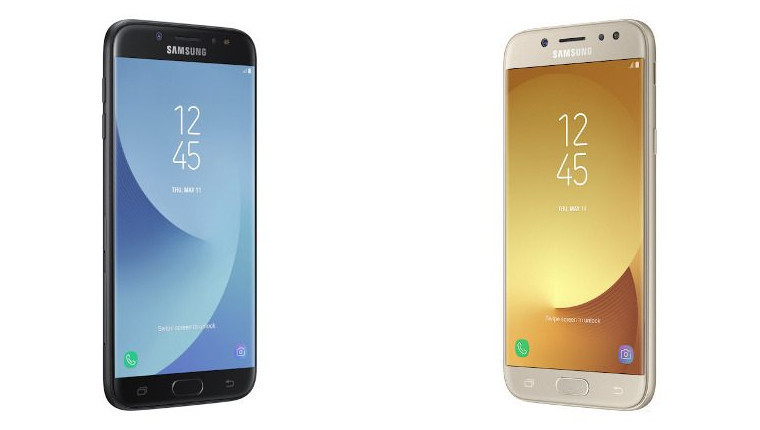 Samsung has refreshed its J series of smartphones, the Galaxy J3, Galaxy J5, and Galaxy J7. The phones will be available in Europe over the next few months. The J3 will also come to the USA, although its design will be slightly different from the European variant.

The Samsung Galaxy J3 is the smallest of all three devices with its 5” AMOLED HD display. It’s powered by a hefty octa-core Exynos 7570 processor and each core has a clock speed of 1.4GHz. It ships with 2GB of RAM and 16GB internal storage which can be expanded with a microSD card (up to 256GB). The rear camera is 13MP, and the front facing camera is 5MP. The J3, which is powered by Google’s latest version of Android Nougat (7.0), features a 2600mAh battery.

The Galaxy J5 is the mid-spec device of the line-up. It includes a 5.2” full HD AMOLED display and is powered by an octa-core Exynos 7870 processor. There’s 2GB of RAM and 16GB of internal storage just like the J3. The storage is expandable with a microSD card (up to 256GB). The cameras on this device are the same as on the J3 as well as the operating system. The larger screen on this device has allowed Samsung to fit a bigger, 3000 mAh battery.

Lastly, the Galaxy J7 features a 5.5” display, it retains the same CPU as the J5 but the RAM has been bumped to 3GB. It features an AMOLED display, but has a larger 1080p resolution. There’s a bigger 3600mAh battery in the J7, and a better front facing camera which is 13MP, the rear camera has stayed the same at 13MP. The J7 has also been issued with an IP54 splash resistance certification, which the other devices weren't given.