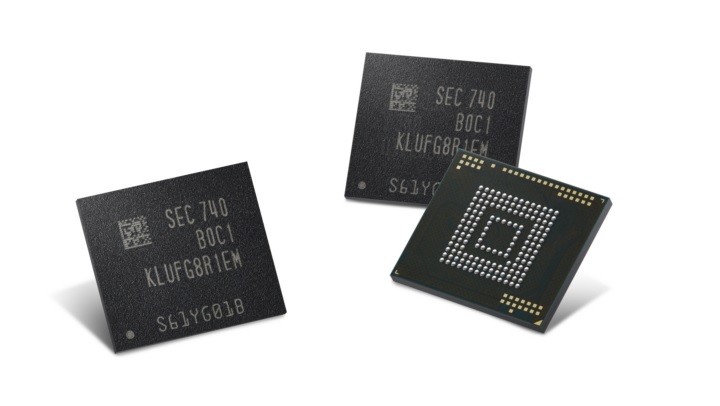 It was almost two years ago that Samsung announced that it was kicking off mass-production of 256GB storage chips implementing the Universal Flash Storage (UFS) 2.0 interface boasting speeds of up to 850MB/s for sequential reads and 260MB/s for writes. The news came just days after the Galaxy S7 and S7 edge were unveiled both of which incorporated UFS 2.0 onboard storage in either 32GB or 64GB capacities.

Now, the electronics giant has disclosed that it has begun production of 512GB UFS-based embedded storage chips designed "for use in next-generation mobile devices". While the company's press release does not specifically mention which version of the UFS interface had been implemented, Samsung did state that the storage package could attain "sequential read and writes reaching up to 860 megabytes per second (MB/s) and 255MB/s respectively" putting it very much in the ballpark of UFS 2.0.

"The new Samsung 512GB eUFS provides the best embedded storage solution for next-generation premium smartphones by overcoming potential limitations in system performance that can occur with the use of micro SD cards.

By assuring an early, stable supply of this advanced embedded storage, Samsung is taking a big step forward in contributing to timely launches of next-generation mobile devices by mobile manufacturers around the world."

Reading into this statement, one might possibly construe that the eUFS solution might appear inside a variant of Samsung's next top-tier handset, the yet to be announced Galaxy S9. With 512GB of onboard storage, it would, for most people, eliminate the need for supplementary storage options, such as microSD cards. However, the inclusion of half a terabyte of onboard storage would undoubtedly push up the price of the phone, given that the 256GB version of Galaxy Note8 topped $1,000.

Of course, we will have to wait until Samsung serves up the official word on its latest Galaxy S flagship. However, we may not have to wait too long if reports hold true that the company will announce the S9 and S9+ at CES in January.