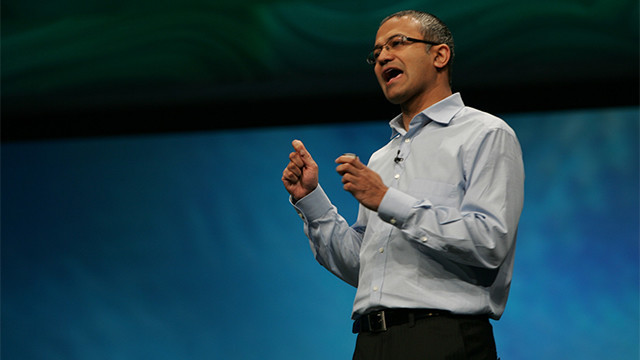 With reports now mounting that Satya Nadella will soon be named chief executive of Microsoft, where he currently serves as the head of its cloud services division, further reports are illustrating the complexity of Microsoft's impending transition. One new report claims Bill Gates' rumored removal as chairman is actually to become more involved with Microsoft's products.

According to a new report from Re/code's Kara Swisher, who has broken much of the news about Microsoft's CEO search, Microsoft insiders say "Nadella has always been [Gates'] favorite candidate," and the selection has primarily been the decision of the Microsoft co-founder. So why are reports now emerging that Gates may step down as chairman of the company? Swisher says it's because he will actually be more involved on Microsoft's products, and he would even remain on the board if he does step down from the chairman role.

Swisher states her sources say Nadella "asked Gates to do so, helping specifically with technology and product problems," with the duo even meeting recently to determine a schedule to make such a scenario work. Gates would only step down, Swisher claims, if an arrangement could be made where he's more involved in Microsoft.

If the arrangement is made, Gates would serve as a "wingman," Swisher says, which would give Nadella a form of backup against Microsoft's other executives.

The report aligns with previous statements made by Gates that he would be more involved at Microsoft once a new chief executive is selected, and not having to manage Microsoft's board would give him more time to do just that. Gates has also emphasized that he will never return to Microsoft full time, instead focusing on his charity work with the Bill & Melinda Gates Foundation. Given his time constraints, it would make sense that Gates would have to outline a schedule with Nadella prior to stepping down as chairman to ensure the arrangement is manageable.