The reputation of Nintendo's Wii may have been tarnished by many a mediocre bargain bin game but, lucky for you, The Legend of Zelda: Skyward Sword isn't one of those. It's the Wii's last big game, and it stands out as one of the best games that's available for the Wii.

Entering the world of Skyloft, the first thing that you're going to notice is that the world is the love child of the colorful, cell shaded style of Wind Waker and the grittier look of Twilight Princess. It's like someone took the models from Twilight Princess and painted over them with Wind Waker colors. The style is new to Zelda, and it kind of reminded me of Mabinogi.

I can't say much for the graphics. At this point, there just isn't much that can be done with the system. Skyward Sword isn't ugly – to the contrary, it's actually quite pretty in some places, but this is due to the design and look of the game, not to anything graphical. 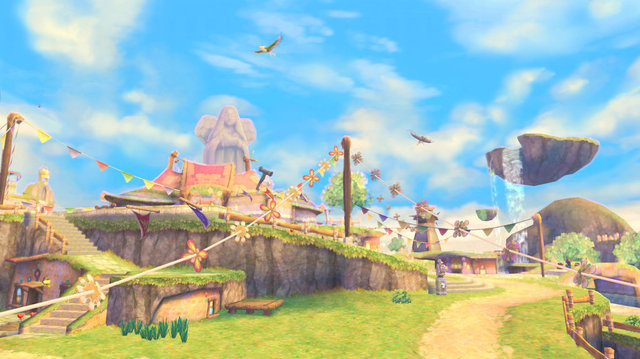 As soon as I took flight (more on that later), it occurred to me that this could have been a much more impressive game without so many loading screens. There are sequences where you'll be falling for hundreds and hundreds of feet, and you can see the whole world stretched out below. Sadly, when you get closer to the ground, everything gets ruined by a loading screen, and then you're there.

Still, Nintendo games are all about substance - it's the gameplay that matters. It's why we're still playing the original Legend of Zelda 25 years later, and it's why we'll still be playing Skyward Sword 25 years from now. For the most part, Skyward Sword excels in this department.

It takes the game a while to get started, as you navigate through a slow and frankly boring intro for the first hour or so. On the other hand, if you aren't so familiar with the series' mechanics, it might not be so boring. I was about 30 minutes in before I actually got into any action.

Skyward Sword's combat is vastly different compared to anything you've experienced before. The closest comparison is the fencing game in Wii Sports Resort. Whereas Twilight Princess' motion controls pretty much meant that you kind of waved your WiiMote to make Link bash something, in Skyward Sword it means that, ideally, Link does whatever you do. Unfortunately, we do not live in an ideal world.

Many enemies require a specific kind of attack to kill them, whether it's a side swipe or a thrust. Most of the time this ends up being reduced to frantically waving your controller in every direction possible until the right thing happens. A slash turns into a thrust, a thrust turns into a spin... it's fun to have so much control over the sword, but your motions just don't always translate accurately to what happens in the game. 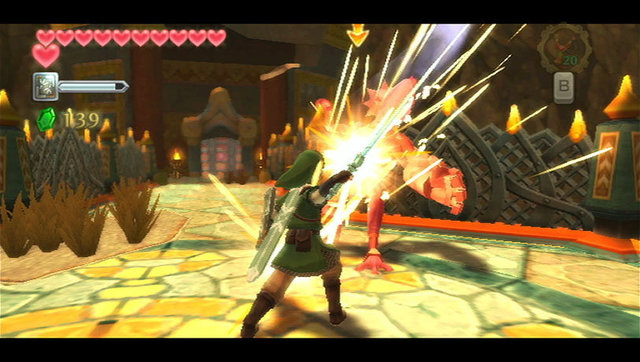 On the other hand, I think that it's really awesome that they at least tried to implement such a detailed combat system. When it works, fights become miniature puzzles, where you're trying to figure out exactly how you need to slash to damage the enemy in front of you.

Also new to combat and pretty much anything physical is the introduction of a stamina system. Whenever you try to lift something really heavy, sprint, or perform a special attack, you'll see a green orb in the corner of the screen. As you perform strenuous actions, you'll see it gradually deplete. If it's empty, you end up not being able to move for a few seconds. It's a simple addition, but it actually adds a new level of challenge to the game. I didn't think I was going to like it at first, but it's grown on me.

Another new feature is a crafting system. Now, when you hear the word 'crafting' you probably think of hours of tedious grinding and other assorted tasks, but it's nothing like that. Along your adventure you'll find things like pieces of amber hidden under a log, or a claw from one of the monsters you just killed. You can use these to improve your items, like making your shield stronger, or to give your slingshot the ability to fire more than one Deku nut at a time. 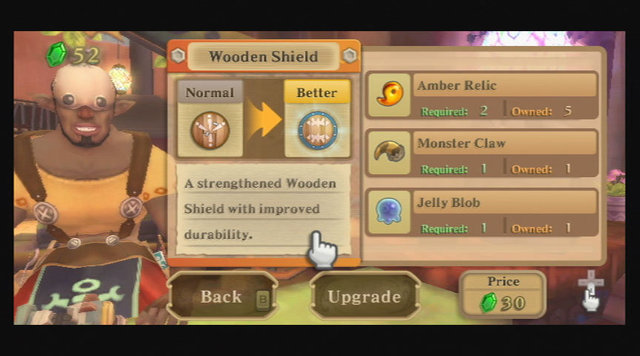 Speaking of bugs (insects – the 'good' kind, if you can consider them that), that's another interesting little feature. I know that we've seen bugs in other Zelda games, but not like this. You'll see all sorts of different species crawling around, each with its own use. Generally, you'll catch them by rolling into the surface they're on and picking them up when they fall. You can also use a net to catch flying insects, which are used in potions.

The entire concept of an overworld has gotten a serious makeover. Skyloft serves as the overworld, where you can visit various floating islands, a few of which are interesting. Skyloft will be your base, where you'll pick up supplies and refuel after your adventures below.

Wind Waker had a ship; Twilight Princess had a wolf; Skyward Sword has a bird. Your primary means of transportation is a red Loftwing, a very, very big bird. Even though it's mostly used for exploration, there are a few aerial combat sequences. Flying is really a lot of fun, and it looks like it came right out of Avatar. 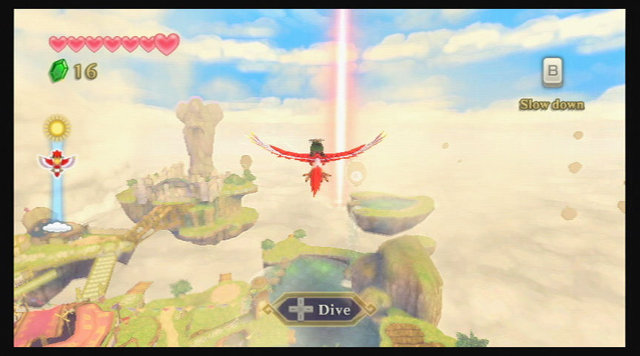 This time around, Hyrule itself is a dangerous place, completely overrun with monsters. Unsurprisingly, Zelda has managed to get herself trapped there. It feels more like a dungeon, since there really aren't any rest stops or safe places along the way, at least not that I've seen so far. To be honest, I kind of miss the 'classic' kind of Zelda game, with a massive world full of surprises and ripe for exploration.

In Skyward Sword, this takes a back-seat for action and puzzle solving. It isn't nearly as linear as Final Fantasy XIII, but I hope that next time around we'll get a more traditional game – with a twist, of course. 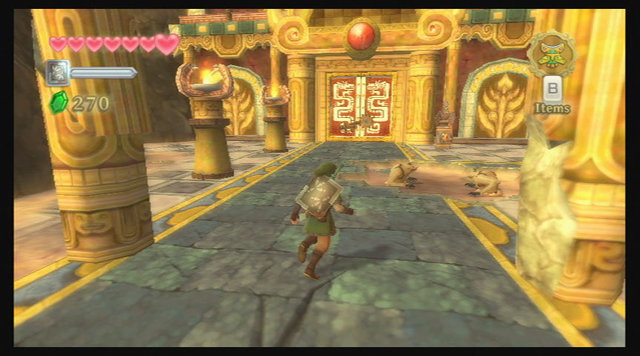 Inventory management has gotten a lot easier this time around, with all of your items at your finger tips with a simple click of the button, so you don't ever have to leave the action.

If Skyward Sword has one major problem, it's the fetch quests. Sadly, even though it was already a huge game, the developers felt the need to insert several hours worth of mind numbing fetch quests that will send you backtracking through the same areas again... and again... and again. It's totally mind-boggling as to why they included them, since the game has more than enough good content to offer without it.

Ultimately, have no doubt that Skyward Sword is a great game, and you're really cheating yourself by missing it. Nothing's perfect, and it does have a few problems, but if you can look past them, you're in for a really fun and addictive experience. It's been good enough to completely tear me away from Skyrim for the last couple of days, and that says something.