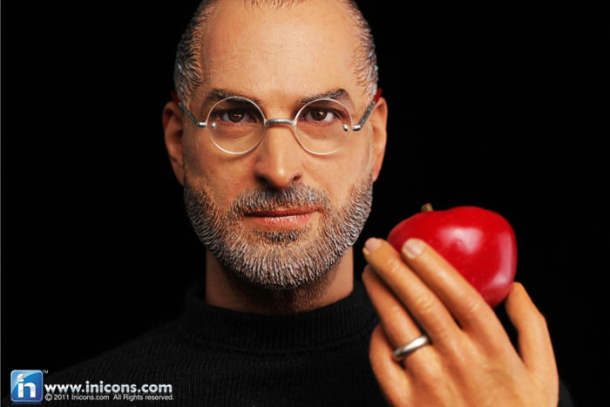 Plans to offer consumers a highly detailed action figure based on Apple's co-founder Steve Jobs have been shut down. The In Icons web site has now posted a message saying that the action figure, which was planned for release in February for $99.99, have been canceled.

The site first offered the 12 inch doll for sale in late December 2011. The pictures on the site made the doll look very realistic with lots of Jobs' trademarks (glasses, turtleneck and more). It was also supposed to be released with a number of accessories that will be familiar to Apple fans, including a stage backdrop with the phrase "One More Thing" printed on it.

Apple slapped In Icons with a cease and desist letter in early January saying that the company did not have the right to sell such a product.

In his message on the In Icons site today, company head Tandy Cheung said:

I would like to take this opportunity to reiterate that the original intention for creating the figurine was driven by a fan’s admiration of Steve. We respect copyright and trade mark rights and therefore indicated on our site that we were not providing any Mac, iPhone and iPad models with the figurine. Further, we haven't used any Apple related brands. Unfortunately we have received immense pressure from the lawyers of Apple and Steve Jobs family. Regardless of the pressure, I am still Steve’s fan, I fully respect Steve, and his family, and it is definitely not my wish or intention that they be upset. Though we still believe that we have not overstepped any legal boundaries, we have decided to completely stop the offer, production and sale of the Steve Jobs figurine out of our heartfelt sensitivity to the feelings of the Jobs family.

We understand that this decision will cause many of the fans' disappointment, but please forgive us as there is no other alternative unless to have the blessing from Steve Jobs family… We will aim to have full refund to the fans who have pre-ordered.