It is with great sadness that we must report that Steve Jobs has passed away. It was not long ago that he stepped down from Apple after a career that anyone could be proud of. Unfortunately, his career was cut short after several battles with different medical issues that forced him to eventually step down as CEO. Apple has issued the following statement:

We are deeply saddened to announce that Steve Jobs passed away today.

Steve’s brilliance, passion and energy were the source of countless innovations that enrich and improve all of our lives. The world is immeasurably better because of Steve.

His greatest love was for his wife, Laurene, and his family. Our hearts go out to them and to all who were touched by his extraordinary gifts.

No matter if you never owned a single Apple product or bought each new product the company came out, the entire industry benefited from his bold style and even more ambitious plans. Steve Jobs' not only saved a company from the brink of bankruptcy but he turned that company into the most valuable company in the World. He is a leader that anyone can admire, a true visionary of our time.

Flags today were flying at half mast at Apple HQ, in tribute to Steve. Tim Cook said today that "No words could adequately express our sadness at Steve Jobs' death." 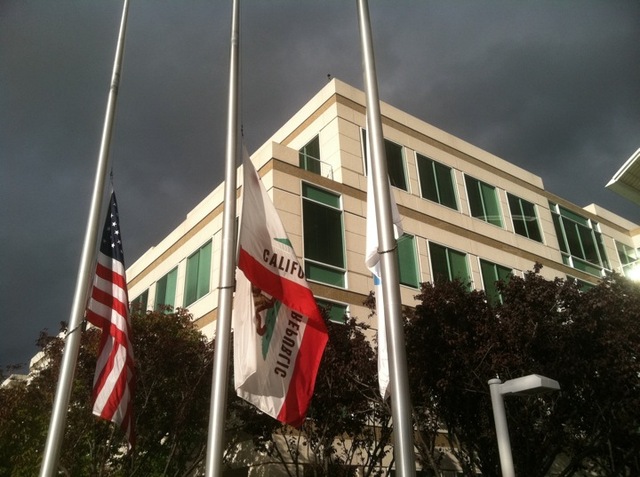 Apple has posted up a tribute at apple.com/stevejobs, below is a screenshot of that page.

Our thoughts are with his family and hope that his last moments are Earth were peaceful. From everyone at Neowin, we say rest in peace Steve and thanks for all that you have done.

The following email was sent to employees from Apple's CEO, Tim Cook:

I have some very sad news to share with all of you. Steve passed away earlier today.

Apple has lost a visionary and creative genius, and the world has lost an amazing
human being. Those of us who have been fortunate enough to know and work with Steve have lost a dear friend and an inspiring mentor. Steve leaves behind a company that only he could have built, and his spirit will forever be the foundation of Apple.

We are planning a celebration of Steve’s extraordinary life for Apple employees that will take place soon. If you would like to share your thoughts, memories and condolences in the interim, you can simply email rememberingsteve@apple.com.

No words can adequately express our sadness at Steve’s death or our gratitude for the opportunity to work with him. We will honor his memory by dedicating ourselves to continuing the work he loved so much.