According to a study by OPSWAT, free antivirus software is most popular amongst users. OPSWAT retrieved their data from Windows users who use some of their applications; AppRemover, an application designed to uninstall security applications and Am I Oesis OK? which detects whether security applications are compatible with other applications that a user may be running. They said that rather than building the reports based on vendor reported sales and download figures, "...we are able to present the following report based purely on the detection of the applications that tens of thousands of users actually have installed on their endpoints."

Free antivirus products took the top four spots in the in the study with avast! Free Antivirus in the top spot followed by Avira AntiVir  Personal, AVG Antivirus Free and Microsoft Security Essentials. "42% of the product market is controlled by free products, while vendors that primarily offer a free product have a 48% market share. It would appear that end users have as much faith in the ability of free antivirus applications to keep them secure as they do paid antivirus." The two names that used to dominate the antivirus market, Symantec (Norton) and McAfee, are starting to lose their grasp to their free competitors.

Another interesting fact stated in the report is that 52% of antivirus vendors, AVAST, Avira, AVG, ESET, Panda, BitDefender, G Data and Sophos, are based in Europe while 31%, Symantec, Microsoft, McAfee, PC Tools and Sunbelt, are based in the US. 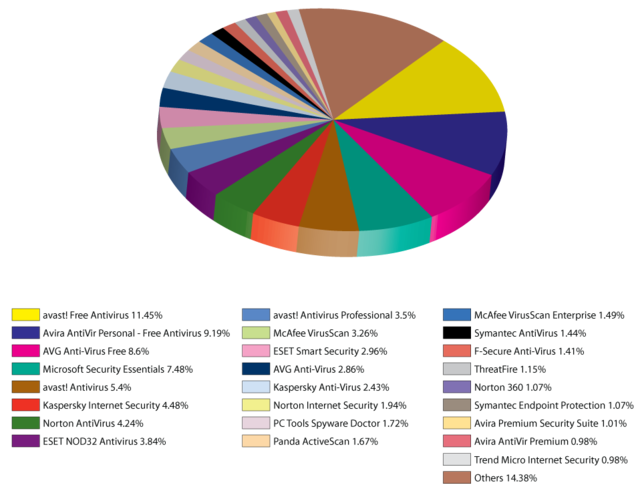