The IE8 beta 2 support page has been updated again and the support for IE8 pre-released versions has now been bumped to until March 31st, 2009. This could indicate that the final product may be released during April.

Dean Hachamovitch, General Manager, Internet Explorer had officially announced earlier that there will be one more public update of IE8 in the first quarter of 2009, followed up by the final release. 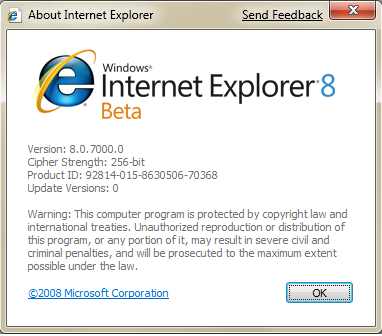 Windows 7 is also rumoured to be released as early as 2009. Can this be a reason for IE8 getting delayed so that it can coincide with the Windows 7 release?