Earlier today you may have heard about Windows Live Essentials beta 2 being released. With this update, Windows Live Messenger received a new feature which people have been craving for a while: the ability to chat with Facebook friends. This has been expected as in the previous beta there was some Facebook integration mostly having to do with status updates, but it did show contacts as well. The messenger also has connectivity with many other social networks truly making this your social hub. 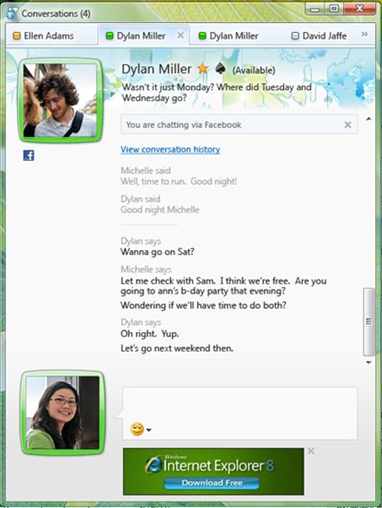 AOL has had the ability to chat with Facebook friends via their AIM client since the beta days of AIM 7, as well as support status updates via AOL Lifestream. Since Windows 7 isn't going to see any major upgrades for a while, Microsoft has been hard at work on their Windows Live set of applications, so it only makes sense that they would try to match and beat the functionality of AOL's client. Microsoft's focus has been on creating the most seamless social experience for their users by integrating many services into their Windows Live products.

Directly from Windows Live Photo Gallery you can upload to Facebook, YouTube, and Flickr, as well as the company's own SkyDrive. Then from Windows Live Messenger you can chat with all your friends on Facebook without needing to visit the site. The interface works the same as a regular instant message, so this will feel right at home. Do note however that Microsoft has not enabled Facebook chat for everyone just yet, it currently stands at only the United States, United Kingdom, France, Germany, Russia, and Brazil.

Windows Live Messenger also allows you to view status updates on Facebook and MySpace all from the main window, although for some that has still been buggy.