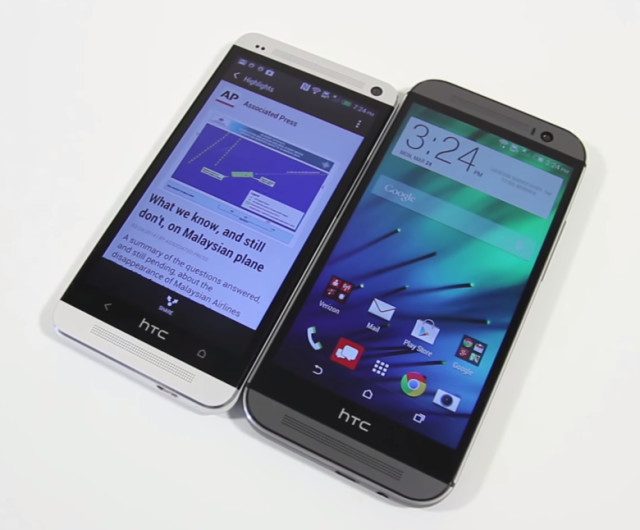 Another full-length video has leaked courtesy of user TechSmartt on Youtube. But, in stark contrast to a video leaked yesterday, this video compares the current HTC One (M7) with the new HTC One (M8). The reviewer does a great job of breaking down the new HTC One in the video by going over the important details of the new phone.

Compared to last years model, we can see HTC is using an much improved processor and has bumped up the battery by 300mAh to 2600mAh. HTC has also updated Sense to its latest version 6.0, which includes a much improved Blinkfeed. One of the highlights of the new HTC One is the 5MP front-facing camera and the dual rear camera, which has the ability to refocus the pictures after it has been taken. This camera will also allow users to create 3D images as well.

The camera is an ultra pixel camera, relying on a larger sensor than higher megapixel to create better images. The results are much improved over last years model resulting in better pictures in low light scenarios. With the new HTC One, it looks like HTC has found a way to improve on last years model by utilizing the same premium build quality, improved camera features, and refined the experience to introduce another stellar product. It's quite possible that the new HTC One will be poised to receive accolades again this year.

The video does a great job of giving a brief but thorough overview of the new HTC One. For those interested, the new the new HTC One will debut at an event today in New York at 11 a.m EST / 8a.m. PST.