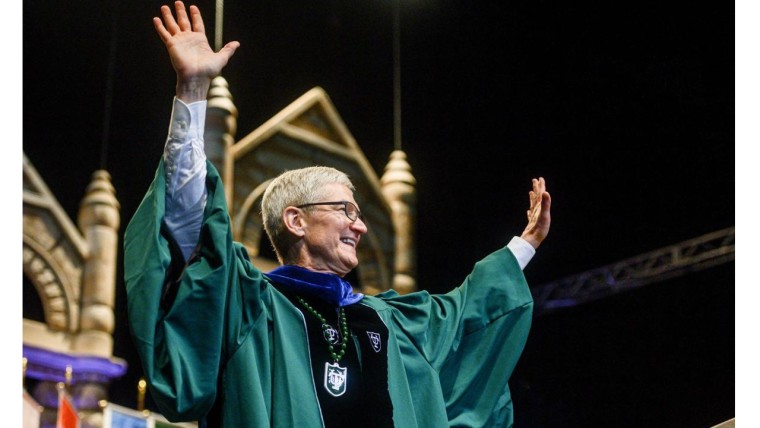 Apple CEO Tim Cook addressed the Tulane University graduates this Saturday at the Mercedes-Benz Superdome in New Orleans, Louisiana. He delivered the commencement speech at the graduation ceremony in which spoke about many important real-world issues. He related his journey to Apple to the young graduates, hoping to inspire them to take risks and work hard in life. During his speech, Cook asked the graduating students to be bolder and do better than the generation before them. The CEO also received an honorary degree as part of the inauguration ceremony.

Tim Cook described how Steve Jobs managed to convince him to quit his safe job and work for Apple instead - the company that was close to going bankrupt at the time. Cook said:

“In 1998, Steve Jobs convinced me to leave Compaq behind to join a company that was on the verge of bankruptcy. They made computers, but at that moment at least, people weren’t interested in buying them. Steve had a plan to change things. And I wanted to be a part of it. I wasn’t just about the iMac or the iPod or everything that came after. It was about the values that brought these inventions to life. The idea that putting powerful tools in the hands of everyday people helps unleash creativity and moves humanity forward.”

Quoting a popular idiom about work that says if you do what you love, you’ll never work a day in your life, Tim Cook called the saying nonsensical. "We can build things that help us imagine a better world, then make it real," he said. "At Apple, I learned that that is a crock. you’ll work harder than you ever thought possible, but the tools will feel light in your hands.”

At this point, Cook changed the tone of his speech and directed his efforts towards the topic of climate change. He talked about how climate change is affecting entire communities situated in coastal areas, who are left with no options but to move:

"This problem doesn’t get easier based on who wins an election. It’s about who has won life’s lottery and has the luxury of ignoring this issue, and who stands to lose everything. The coastal communities, including some right here in Louisiana, that are already making plans to leave behind the places they've called home for generations and head for higher ground."

In his closing statement, Apple's CEO encouraged the young graduates at Tulane University to create a better tomorrow and asked them to be grateful for what they have. “Be motivated by your duty to build a better world. Young people have changed the course of history time and time again. Now it’s time to change it once more. I know the urgency of that truth is with you today. Feel big, because no one can make you feel small. Feel brave because the challenges are great but you are great. Feel grateful, because someone sacrificed to make this moment possible for you." he said.

"Here in this stadium, I can feel this courage. Try something. You may succeed, you may fail. Make it your life’s work to remake the world. There is nothing more beautiful than working to leave something better for humanity.” Cook concluded.