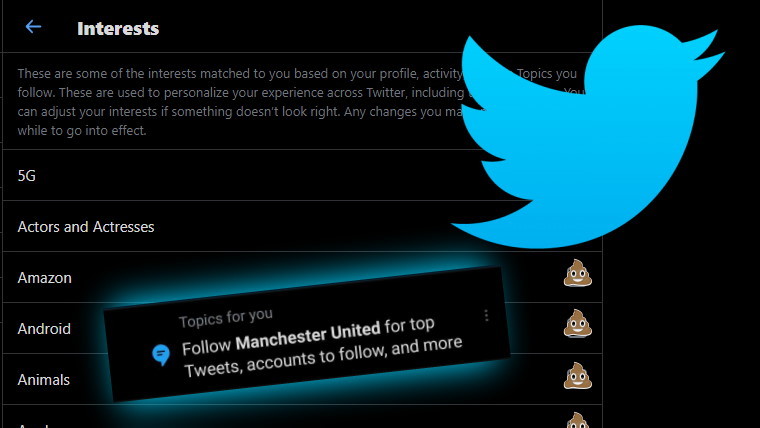 One morning while checking out a link to a tweet directly on Twitter, it showed I had an unread notification, but this was not so on Tweeten. Intrigued, I went and had a look and saw that Twitter was suggesting for me to follow topics on "Manchester United FC"... huh? As a Portsmouth FC fan that follows the official club Twitter handle as well as several people affiliated with Pompey (including the owner of the club) it makes me wonder why Twitter is suggesting a football club I clearly have no interest in. In fact, the whole Topic Suggestions feature is annoying, I keep dismissing them and more come each day, whatever happened to just letting users sign up to lists or search for interests themselves?

Topics initially launched back at the end of 2019 as a means to opt into topics of interest; it plugs into "Interests", which is a tracking feature that tries to make sense of your behavior when interacting with Twitter and then builds a profile of what you're most likely interested in, which in turn then suggests those interests as Topics to follow.

Anyway, there is a way to turn them off thanks to some code uploaded to Github that you can run in the browser dev tools console (which was spotted via Reddit), but it requires a lot of patience, and you will also be forced to uncheck new "Interests", or should I say "Topic Suggestions", that get added to the list every once in a while.

Once you are on that page you will see a long list of checked interests, they will all be enabled unless you have already manually disabled some Interests.

On Github, the original code has a timer set of 100, but upon testing and reading the comments I had more success with fewer timeouts by upping it to 1000.

As you can see in our video, I was already quite a ways into running it (by this time I had to restart it for the fourth time) before getting a "Twitter is over capacity..." error. To be clear, the way this page is set up also creates the overcapacity error if you manually uncheck each line without using the script. The page reloads in the background to save the preference, and the further down the page you get the more likely it is that it will fail.

So our suggestion is to let the script run with an ample timer like 1000 or more, and when it starts failing, manually reload the page and wait a few minutes before pasting the script in again and running it in the console.

It is like certain platforms enjoy burying settings or make them incredibly hard to find and disable. What happened to when tech was supposed to add value to our lives? Now it seems like it just makes for an annoying garbagefest to deal with.

Anyway, this won't be for everyone, but if you do decide to use it, let us know how long it took you to get everything unchecked. In our testing, it took us one hour and fifteen minutes from start to finish, including the waiting to run it again in between. Oh, and you can still follow Topics by typing in something of interest on Twitter and then electing to follow the applicable Topic.